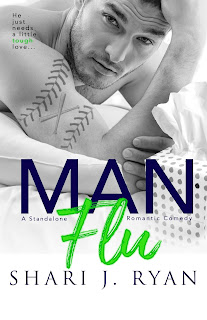 It's been a while since I last read a Shari J. Ryan-penned novel, and that's mostly to due with time issues. Seriously, so many books, so little time, people. When I read the blurb for her latest release, I was immediately curious about it. Man Flu was a romantic comedy, and while I have seen via Goodreads that the author has a couple of short stories on multi-authored anthologies and a previous rom-com release, Manservant, which is not connected and a standalone, this was going to be my first time reading a rom-com from her. So, what's my verdict? Please read on!

Man Flu is the story of Hannah Pierce, a thirty-three-year-old working woman with a five-year-old daughter who divorced her husband a year ago after catching him cheating on her. Said husband AND the girl he was cheating on Hannah with also happen to be her next-door neighbors. Fun times! With everything going on, she desperately needs an able-minded temp. In walks thirty-five-year-old Logan Grier, who sure doesn't look like any other temp she's ever had, but the gorgeous man proves to be quite an asset, anticipating her needs...in more ways than one!

Romance? Check. Comedy? Check. Basically, this standalone ticks off the two main components required in this romance sub-genre. The story itself was pretty humorous, what with a single mother battling male asshattery, specifically that of her asshat male co-workers and an asshat ex-husband. In the year since her divorce, Hannah's become far more independent, but there's no denying that she still looks to have a man in her life. Logan could very well be that man, but Hannah keeps a firm hold on her life, refusing to cede control to anybody, even Logan.

There were a number of twists in the story, one that I saw coming from the moment Logan stepped into Hannah's office, but the second and third ones were indeed a bit of a surprise. The humor ranged from lighthearted to toilet (literally!), and there's even a hint of drama. The two things that were a bit iffy for me had to do with Cora, Hannah's daughter, speaking as if she were waaay older than five, and Logan's kinda-sorta-maybe buddy relationship with Hannah's ex while they were sick. Overall though, Man Flu was an four-starred entertaining read. ♥