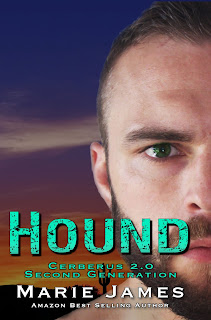 The manner in which the first novel in Marie James's spin-off series, Cerberus MC 2.0, ended alongside that sneak peek given had me looking forward to reading this newest novel, Hound. Georgia Anderson has run away from the only life she's known--from her family and the Cerberus motorcycle club, of which her father is the president. She's made her way from New Mexico to Texas and is shedding her clothes for anyone and everyone at a strip club. It's there that she meets thirty-four-year-old Jameson Rawley, a man who makes her feel a whole lot more than she's ever felt before he makes her feel like a whore. Of course, he had no idea that the hot stripper nicknamed Orphan Annie was actually the young woman he was supposed to be looking for--the daughter of the Cerberus prez, the very MC he wants to find his place in. On the other hand, Gigi has no idea that Jameson is the newest member of the club, unless her father does the unthinkable upon learning that the guy everyone calls Hound has had his way with his daughter. Hound has sworn to stay away from Gigi; however, the twenty-year-old has made no promises...

If Snatch was my favorite in the original Cerberus MC series, then Hound is my favorite (so far) in the spin-off. Lawson was good, but this story about a still somewhat immature and rebellious twenty-year-old MC princess and the thirty-four-year-old former Marine who changes her world turned out to be far more than I could have hoped for. Everything about Gigi and Jameson (aka Hound, but I'm going with his given name because that's how Gigi sees him) was unapologetic. There was always this intensity between the two of them, only varying in terms of how palpable it was from time to time. Yes, there was that lust from the get-go, but theirs wasn't a love match straightaway. They had to work through certain issues, especially since Jameson had to earn the trust of the club in general and Gigi's father in particular. There was also Gigi needing to do a whole lot of growing up, because goodness, the girl was so damn childish in the first book and for a number of chapters in this second one. I wasn't a fan of hers in Lawson, but she thankfully did win me over by the time everything was over and done with. So, yay!

This story felt different from any of the rest, whether it be the original or this spin-off, and I think it had a lot to do with Jameson's history and his transition from the brotherhood in the Marine Corps to the brotherhood in a motorcycle club. There was also a particular incident in the last quarter of the book that caught me off-guard, mainly because there were certain characters who I recognized from a highly popular trilogy that I had on my list of 2017 top reads. I won't mention which characters and from what trilogy, but they're difficult to miss if you've read those books. I'm not sure if I missed the trilogy title and the author in any acknowledgments in this book, but I do hope that they're somewhere in there. I'm just a stickler for stuff like that. As far as the story itself, I tip my hat to the author because I have read all the other Cerberus MC and Cerberus MC 2.0 books, as well as her standalones, and this latest release of hers is quite possibly one of her best to date. It's fast-paced, well-written, and it had me invested in Gigi and Jameson's story while also piquing my interest for book three. Hound easily garners five stars. ♥

Read my reviews for the Cerberus MC 2.0 series: