Review: Down by Contact by Santino Hassell (The Barons #2) 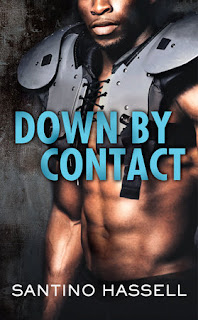 My laugh bordered on hysterical, but I didn’t care. I didn’t even care how goofy I was acting when I rolled him so he was stretched atop me with our faces crushed together. This was as close to relationship goals as I’d ever gotten, and I was fucking happy.

“Because . . .” I squeezed him in a bear hug. “Something that feels this good can’t go wrong.”


This book! Gah! Waiting for the release of Down by Contact, the second novel in Santino Hassell's The Barons football romance series, was a test in what little patience I've been known to have. I actually "wished" for this on NetGalley because it wasn't available for request when it first appeared on the site, but alas, I never got any sort of approval or denial from the publisher. Ditto with the email I sent the publicist who originally sent me an advanced reader copy of the first book, Illegal Contact. Had I been denied an ARC, I would have been okay and simply waited for my pre-order, but obviously, I wasn't a happy camper about basically not getting any sort of response. Okay, maybe I'm being all whiny, but hey, I don't deny being a whiny bitch at times. This is me at my disheartened best.

Okay, I've had my bottle of whine, so let's get on to my review! I had high expectations for this book, especially given how fabulous of a read the series starter was, having landed on my year-end list of top reads for 2017. This had the same enemies-to-lovers trope as the first book but on a far more intense and hostile level. There was no love lost between New York Barons quarterback Simeon Boudreaux and New Jersey Predators linebacker Adrián Bravo, both twenty-seven years old. The funny thing is, these two actually used to have a friendship that could have been a total bromance when Simeon was still part of the practice team of the Predators. Once Simeon lands in enemy territory, all bets are off, and things have been heated between the two athletes--and not in a good way.

When the seemingly homophobic tweets and soundbites from Adrián's end push Simeon a wee bit too far, things escalate into outright aggression on the field. That one encounter leads to both men being suspended for six games during the regular season. They're also mandated to become mentors of sorts for preteens who go to a community center in the Brooklyn neighborhood of Williamsburg. Teaching the importance of sportsmanship and teamwork to twelve kids who don't seem all that into football proves to be waaay beyond their expertise, but if these two have any hope of surviving the next several weeks, they'll have to practice what they preach and have a united front. The unlikeliest of friendships develops and becomes far more, but when their closeness is scrutinized, will Simeon be able to trust what they have and will Adrián finally embrace the truth he's been avoiding for years?

If I had to limit myself to just one word to describe this book it would be this: MORE. This was so much more than I could have hoped. It was far more than I expected. It left me wanting more from this series and this author. This isn't my first read from Hassell, but I love how he's taken the sports romance sub-genre and made it his own. You couldn't have made me turn away from Simeon and Adrián and their story even if had paid me to. This was more than a simple tale about two jocks who harbor lots of animosity towards each other and then get it on before falling in love. Their story has its complexities. From being comfortable in one's own sexuality and the macho image that many male athletes employ--whether forcibly or otherwise--to personal support systems and pressure from the league, media, and the people around you--do you choose to live up to expectations or do you just...live?

Hassell's writing rarely meanders. He tends to give his readers something substantial, something that would be worth the time you put into reading. He doesn't disappoint with this latest release of his. He must have known expectations were up in the stratosphere for this one. After all, I wasn't the only reader slash blogger to consider Illegal Contact of the best books from last year, what with the reception to that novel probably having inspired the publisher to up the series from two to four. As a side note, while Case Bianchi and Joe Carmichael caught my attention in the first book, Rocky Swoops, Adrián's teammate who was outwardly homophobic but had my gaydar pinging, snagged it this time around. Dare I hope he's paired with one of them (even if none of the three are actual Barons players)? But I digress (again)! If you've never read Illegal Contact, I encourage you to read it as soon as humanly possible then immediately follow it up with Down by Contact. This five-plus-star read must not be missed. ♥

Read my reviews for The Barons series:

Purchase Down by Contact on Amazon | B&N | iBooks | Kobo.