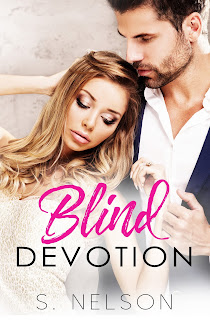 Note: This ARC was provided by the author via The Next Step PR in exchange for an honest review.

Blind Devotion is my first S. Nelson that isn't part of her Knights Corruptions MC series. Those five books are comprise one of my all-time favorite MC romance series, so it goes without saying that my expectations were high although cautiously so. After all, this was a different sub-genre from what I had been used to from the author, but her writing was strong, her characters memorable, and her series arc and individual stories intoxicating, so I was looking forward to how Nelson's new contemporary romance would eventually pan out for me...and well, I have to confess that by the time I had finished it, I was feeling iffy, and I'm guessing that had to do with high expectations.

Twenty-nine-year-old Alina Winthrop is a workaholic who is forced into an arranged engagement with a colleague, all thanks to her controlling father holding her professional future over her head. The night her engagement is announced, she meets cocky and tempting thirty-four-year-old Maxton Colter. While he may have had his own practice on the west coast, Max needed a change, moving to the east coast and working for Alina's father and his law partners. From the moment they meet, Max and Alina have a connection that demands to be explored, but with everything they've worked for on the line, just how devoted are they to the pursuit of lust...and maybe more?

If I describe a book as a good read, more often than not, it would be, well, a good thing. In the case of Blind Devotion, however, it means that I did enjoy it BUT it did leave me wanting. I don't have any sort of hangover from the KCMC books since the series did end last year, but I guess I was hoping for the same level of intensity that those books had. There's no denying that Max was intense, but the story itself felt timid to me. Take note, that doesn't mean the same thing as "boring" because if it's one thing I can say for sure, this standalone wasn't boring and Nelson has given an entertaining albeit not overly compelling read. I'm giving Blind Devotion four of five stars. ♥