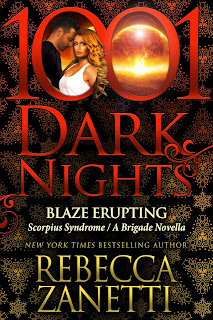 The last time Hugh Johnson saw the girl he nicknamed "Ellie Mae" was a decade ago, but there's no denying that Eleanor Smithers was still every bit the beauty with a brain that he was once lab partners with. He appreciates the reunion and all, but wonders why she would be sitting in his living room with his dog snuggled up beside her. When she informs him that he's the latest member of a group that's been tasked to be the first line of defense against Scorpius, which continues to ravage the country, forcing towns to become abandoned and people to flee to the farthest corners, hoping to be a step ahead. From what Ellie has found out about Hugh, he's the perfect addition to the Brigade, but he's got secrets, making others in the group wary about him and whether or not he should be trusted. It may have been ten years since she had last been around him, but Ellie's trusting her gut--and her heart--knowing that the man she crushed on back then--and clearly still has a crush on today--knows his stuff. When an unexpected threat gets too close, Hugh, Ellie, and the Brigade will have to set their issues aside to make it through.

The Scorpius Syndrome is one of my two top favorite Rebecca Zanetti series, and with the release of Blaze Erupting, I can't help but assume (yes, yes, I know the danger in that) that we've got ourselves a potential spin-off series in the offing. This novella is, indeed, part of the Scorpius Syndrome, but it's also labeled as a Brigade story, so you can see why I would make the assumption that I did. But whether it's part of the original series or is a jump-off point for a spin-off, this novella doesn't skimp on the suspense or the romance that I've come to expect from Zanetti. This may be a quick read compared to the full-length novels in the Scorpius Syndrome series, but it lives up to the standard set by those longer reads, although possibly not as dark as the others, which isn't necessarily a bad thing. I loved Ellie and Hugh! They were gorgeous and geeky, and the story itself had perfectly placed punches of humor. Deke and Nora McDougall from Scorpius Rising are also part of the Brigade, and we meet the trigger-happy Connor Lewis and the mysterious Ivan Milleroff, whose stories I look forward to discovering. Five stars go to Blaze Erupting. ♥