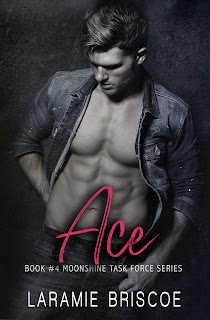 
“Everywhere I’ve been, people have looked at me with pity in their eyes.” She licks her lips. “Everyone but you. You’ve never looked at me like you could fix me, and I can’t tell you how much that means to me.”

“You’re not broken, Violet. There’s nothing to fix.”

Ooh! This book was a long time coming, and while it may have actually only been less than five months but I've been itching to find out what happens to Violet Miller and Ace Bailey ever since it was clear that he had a thing for her and she wasn't immune to his attention in the third novel, Havoc. If you're a fan of Laramie Briscoe's Moonshine Task Force series and you've already read the previous books, particularly the third one, then you'll remember that twenty-nine-year-old Violet was in an abusive marriage and that her husband showed up at the diner she was working at as a waitress and went on to brutally assault her. It's twenty-eight-year-old Anthony Bailey, aka Ace, who rescues her. But even before that life-changing incident, Ace had already taken a particular interest in Violet. With everything that happened between her and her husband, Violet's life feels like it's both at a standstill and in flux. Where does she go from here? Her husband's in prison and her life was tied to his for far longer than it should have been. Violet knows she needs to move forward, but how, and what role would Ace play?

This series was one of my favorites for 2017, and it looks like it's still going to be that in 2018, given how fantastic this fourth book was! Ace wasn't just Ace's story, but it was one that he was always meant to share with Violet. He's this steady presence in her life, one that doesn't push too much but does prod her along to keep her moving on with her journey. I admire the direction that the author decided to take their story on. Having them jump in to bed together as soon as Violet's evil husband was placed behind bars would have been the easy way out, and I'm glad that Briscoe chose to truly build a stronger foundation between these two main characters of hers. As good of a person as Ace has always seemed to be to Violet, she understandably had trust issues, and seeing that relationship of theirs develop and evolve from acquaintances to neighbors to friends and then to more made my heart feel good and highlighted just how worthy Ace was of being a book boyfriend. Seriously, the guy's officially my favorite member of the Moonshine Task Force, and that's saying something because they're all fantastic men.

Aside from Anthony and Violet's love story, we also get updates on the first three couples--Ryan Kepler (aka Renegade) and Whitney  Trumbolt, Trevor Trumbolt (aka Tank) and Daphne Coleman (aka Blaze), and Holden (aka Havoc) and Leighton Thompson--while also getting a bit of a peek as to where Mason's (aka Menace...whose last name I don't recall being mentioned in any of the books, though I do remember him being called "Mace" at one point instead of "Menace") story may be headed. The one who was a wee bit of a scene-stealer was definitely Mason's seventeen-year-old son, Caleb. I'm curious to see if Briscoe will be giving him his shot to shine in the spotlight with a book of his own, which I wouldn't mind seeing as a future spin-off. Yep, major hinting and wishful thinking going on here! Suffice it to say, if the rest of the author's back list and future releases are as addictive as this romantic suspense one of hers, than I suspect I'm going to be doing A LOT of Laramie Briscoe-penned perusing in the future. I'm recommending you read the Moonshine Task Force series in order, and I give Ace five-plus stars. ♥