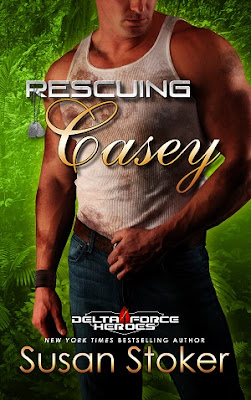 About Rescuing Casey
One-minute Casey Shea was minding her own business, doing her job, teaching entomology to college students, and the next she was in the middle of the Costa Rican jungle fighting for her life.

Troy “Beatle” Lennon had watched his friends fall head over heels in love, but never thought it would happen to him. Until he sees a picture of one of his teammates’ sisters. That was it. The absolute joy in her eyes calls to him in a way he can't understand.

But that joy is currently being threatened by an unknown person who’d had Casey kidnapped and hidden deep in the jungle. It’s up to Beatle to find her and keep her safe until the threat against her can be neutralized. Surviving the dangers of the jungle turns out to be the easy part…staying ahead of the killer is much more complicated…and deadly.

Rescuing Casey is the 7th book in the Delta Force Heroes series. Each book is a standalone, with no cliffhanger endings.

An Excerpt from Rescuing Casey
Casey swayed, but refused to sit. Five minutes. That’s all she had to do. Hell, she’d walked for hours earlier. She could stand, no problem.

But it was a problem. Even though she couldn’t feel her feet, she could feel her legs. And they hurt. Hell, everything hurt. But it was more than that. She was weak. The adrenaline of her rescue had long since worn off and the lack of food and water had caught up to her.

The granola bars she’d eaten earlier, along with the constant intake of water, had gone a long way toward making her feel not on the verge of death. But the week and a half she’d spent underground without real sleep, along with all the worry and stress she’d experienced, had caught up to her.

Just when she thought she was going to fall on her face, Beatle was there.

“Fuck, you’re amazing,” he said, then swung her up into his arms once more.

Casey regretted saying earlier that she wanted to walk out of the jungle. Suddenly she wanted nothing more than to have Beatle carry her out, just like this. But no, that wasn’t fair to him, and she didn’t want to be the weak damsel in distress. She’d stayed alive when she knew others would’ve died, so she could walk her own damn self out of the jungle.

But…Beatle’s arms around her felt so good. Safe.

New York Times, USA Today, and Wall Street Journal bestselling author Susan Stoker has a heart as big as the state of Texas where she lives, but this all-American girl has also spent the last fourteen years living in Missouri, California, Colorado, and Indiana. She's married to a retired Army man who now gets to follow her around the country. 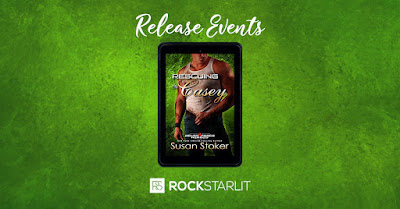