Audiobook Review: For the Living by L.A. Witt, narrated by Charlie David 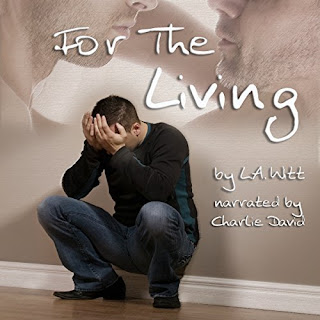 I've read and loved quite a few of L.A. Witt's recent books, starting about two or three years back and including those written her three pseudonyms. Because of her extensive back list, I like the fact that her previously published stuff have been re-released, enabling them to be on my radar and check out what I've been missing. In the case of For the Living, the book was originally released in April of 2012 and then re-released in November of 2016. I got my hands on the 2016 version but didn't get to read it until this weekend alongside listening to the audiobook narrated by Charlie David. Yup, you read that right. I read and listened concurrently.

Being gay is part of who a person is, just like being married is. These are good things. When you happen to be gay and married to your wife who has no clue what your sexuality is? Not so much. This is the dilemma Jay Warren finds himself in. The guilt and shame get to him time and again, even as he swears to himself that he'll confess the truth to Misty. And then the choice is taken from him when his wife passes away. All those negative emotions multiply and Jay is at a loss as to how to live with himself. He finds a sympathetic ear in the form of a funeral director. Scott Lawson knows a great deal about death, but can he teach Jay a thing or two about living?

I'm a self-confessed angst addict, but there is such a thing as too much of a good thing. Everything in modulation and all that. This story? Well, it's got angst and a whole lot of it. Jay goes from sympathetic character to a pathetic one with all his bemoaning and self-flagellation. Yes, he hid such a vital part of himself from the woman he had exchanged vows with, but goodness, it's not like he killed her. There was a lot of woe coming from him, and if I'm being honest here, I felt that Scott deserved better--deserved someone who gave back as much as he took. This ends happily, but it was almost as if it took forever for Scott and Jay to get there.

Here's the thing: L.A. Witt is one of those authors who I don't hesitate to yes to when the opportunity to read something of hers crops up. Loving every single an author has written is a rarity, and with this particular book of Witt's, it just wasn't a favorite of mine. Did I hate it? No, I didn't. There were parts of it that I actually liked. However, it simply didn't click with me as a whole. Even with me listening to the audiobook with Charlie David giving voice to Jay and Scott's story, I felt detached. I've listened to and liked David's narration in the past, but even his vocal talent was not enough for me to give For the Living anything higher than a three-starred rating. ♥

Purchase For the Living on Audible | iTunes.