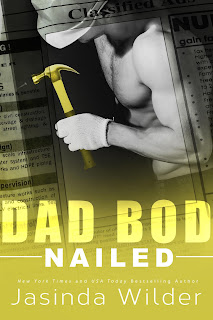 Nailed in book number three in the Dad Bod series from bestselling author Jasinda Wilder and for this third effort, we've got Ryder McCann and Laurel Madison. He's a forty-three and part of Dad Bod Constructing; she's thirty-six and a single mom to nine-year-old Nate. From the moment Ryder and Laurel meet, there's a connection between them, but it's a connection that has them scrambling to find things why they shouldn't be together. The thing is, they're actually more than suited for one another. This is more than just sex...which is why Laurel is totally scared.

There's something so wickedly addictive about this series that from the moment I finish one, I start counting the days and weeks until I've got the next one sitting prettily in my greedy hands, ready for me to devour it in a couple or so hours. Would it be bad form for me to confess that Ryder and Laurel's story could be my favorite in the series (so far)? These two had IT, and by IT I mean that chemistry that I demand from the main characters that I read about. Without that, it becomes difficult for me to become invested, and believe you me, I was very invested here.

From the friendships that Ryder and Laurel fostered with their respective close-knit circle of friends to how they were with each other as their relationship developed and moved forward, this really became a book about love and family. After all, what these guys had with the people closest with them was exactly that--a family and there was a whole lot of love (and teasing) to go around. My favorite thing, however, was Ryder's unconditional love for Nate. That was the cherry on top of a heartwarming AND hot read. Nailed gets five stars and I need Screwed ASAP!