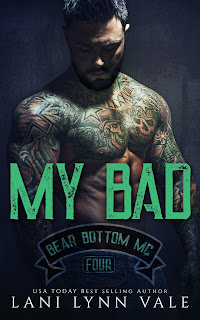 Lani Lynn Vale's Bear Bottom Guardians MC series has quickly become one of my favorite series discoveries for 2018, what with its unique combination of personalities that make up the actual motorcycle club--which is actually a spin-off of another MC, just like the book series--and the stories that they have to tell. My Bad is the fourth full-length novel, all of which were released this year, and it's the story of thirty-two-year-old Hoax Hudson Hicks, a member of the Bear Bottom Guardians and part of the US Army's Delta Force, and Pru Ember Mackenzie, an emergency room nurse and a woman who grew up knowing all about life in an MC. While it is quite possible to read this as a standalone, I think it works better when you read the books in the series in order given that there are certain story lines that overlap and there are more than a few recurring characters...plus it's a fun series to peruse.

When Hoax Hicks showed up at the ER of the local hospital, he was hoping to finally get some sort of medical relief to his erectile dysfunction. Who would have thought that all he needed was to meet the assigned nurse, Pru (not Prudence!) Mackenzie? Hoax was back to being, umm, up and about, and there was no pretending just how drawn he was to her. Pru, on the other hand, pegged Hoax as a military man pretty quickly, and that was already a point against him. She'd already had her heart broken twice by military guys, and she believed tamping down on her attraction to Hoax was what was best. But the heart wants what it wants, and there was no denying the connection that these two shared. However, there was also no denying that the time for Hoax to return to duty was fast approaching, and if it wasn't bad enough he was leaving Pru behind for months, what he doesn't know is that he isn't just leaving the girl he's fallen in love with. He's also leaving behind one (or more) unexpected gifts...

Yes to a female main character with a true sense of self and is able to stand by her convictions while also knowing she has a strong family to lean on and a man who will love and support her through whatever! I loved Pru. She told it like it was and didn't feel the need to try and make herself into someone she wasn't. She was perfect for someone like Hoax, and vice-versa; these two simply fit together and there was nothing forced about their couplehood. I couldn't get enough of them and the hilarious stuff that they got themselves into. But in as funny as most of this book was, I admit that there was one particular moment that had my heart clenching in my chest, bringing me close to tears. I can't give specifics, but I seriously needed a minute to get over my shock at what happened. On a lighter note, the usual suspects were present and accounted for, and I can't wait to get to know the rest of the guys in the club. I wonder if Pru's sisters, Piper and Phoebe, will also be getting their own happily-ever-afters. I have already seen the blurb to book five and am quite excited for it! I'm giving five stars to My Bad. ♥

Side notes: I loved the TV show references (Pru, Phoebe, and Piper--very Charmed--and even Supernatural but you'll have to read the book to find out how that plays out), however, the novel's cover didn't depict Hoax all that well given that he only had ONE tattoo and it was on the underside of one arm. Add to that the blurb mentioning Hoax not knowing about Pru's father being ex-military, which turned out to not be true, considering he knew who the man was VERY early on and there was little to no hesitation on Hoax's part when it came to his pursuit of Pru.

How About No (book three) - five stars - My Review

My Bad (book four) - five stars - My Review (posted above)