Review: Why Her? by Rie Warren (Mistaken Identities #2) 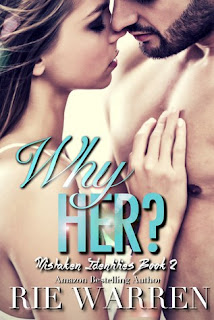 The bar was set REALLY high by the Mistaken Identities series starter, Why Him?, but Rie Warren doesn't disappoint with the release of the second book in the series, Why Her?, which flips the May-December series theme around with the female main character being twelve years younger then her male counterpart. When twenty-seven-year-old building contractor Stefanie "Stevie" Keller shares a hot "almost" moment with an older guy in a bar, she finds it difficult to erase the guy from her head. Maybe a new project will distract her, but the joke's on her when she realizes that the homeowner is none other than the hot older man she danced with--thirty-nine-year-old architect and father to a fourteen-year-old daughter, Cecilia, Kane Bishop. They'd love nothing more than to explore all those what-ifs that one encounter together cropped up, but widower Kane is hesitant to have anything to do with a woman more than a decade younger than him. Why does the hottest woman he's ever seen have to be the tatted up and feisty one giving his home a makeover? Maybe it's time for Kane's life to get a makeover of its own...

This series has quickly become one of my favorites this year. The sex is raunchy and the chemistry sizzling, but never doubt for a minute that it's nothing more than hot fluff and stuff. There's an honest-to-goodness story that plays out, and both Stevie and Kane are at points in their lives where they've decided it's time to stretch their proverbial legs and see where the next phase takes them. Stevie wants to prove herself worthy of taking the reins from her dad every now and again, and Kane simply wants to be able to move on from the loss of his beloved wife. While the sex between them is sizzling, the conversation and banter is witty and had me cracking a grin more than once. There are also supporting characters who appear to have clued in to the romance brewing between Stevie and Kane even as they desperately tried to pretend they were nothing more than contractor and home owner. This book was just as good as the one before it--both of which are standalones, especially given that there are no overlapping story lines. Why Her? snags five stars and here's hoping Rie Warren returns to the series in the future. ♥

Read my reviews for the Mistaken Identities series:

Purchase Why Her? on Amazon.