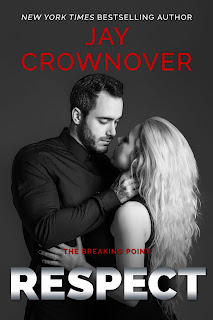 Jay Crownover closes out her The Breaking Point series with a second chance love story that brings this series and the original The Point series full circle with a hint of her Saints of Denver thrown in for good measure. Now, I have yet to read The Point books--which also happens to be the only Crownover series I haven't gotten around to reading!--so admittedly, there was a point--pun unintended!--in Respect where I did feel a teeny, tiny bit lost because there are numerous mentions of the main characters from the three original novels, especially Race Hartman and Brysen Carter, the former being Karsen Carter's brother-in-law-to-be and Noah Booker's boss (at the beginning of the novel) and the latter Karsen's older sister. That aside, this was still one heck of a truly great read.

Having just turned eighteen and a couple of days away from graduating from high school, Karsen Carter felt it was finally time for her to tell the guy she was in love with that she wanted more than friendship from him--that she was no longer a kid. But instead of taking the love she offered, twenty-eight-year-old Noah Booker crushed Karsen's heart, leading her to pack her bags from the place that had become her home and heading to college, wanting to get as far away from Booker as possible. Four years later, Karsen's got her college degree and she's ready to return to the Point, but she doesn't expect to find the man who broke her heart to be standing outside her door. Booker says he's there to fight for his love for Karsen, but is it too late for them to rewrite their fairy tale?

Gah! I loved Karsen and Noah (yeah, I prefer to call him Noah instead of Booker!). It may have taken them four years to get their acts together and go after what they wanted and actually fight for it--more Noah than Karsen because that girl knew what she wanted from the get-go and was prepared to go all in. These two had me cheering for them from the beginning (yes, even when Noah did what he did to her) and when they finally decided it was time for them to stand up to those who thought it was okay to play god and forced their lives to go in directions as far away from each other as possible, I wanted to give them a standing ovation. Respect's story does have some suspense in it, thanks to a stalker, and that plus the romance results in a five-star series ending for The Point series. ♥

Read my reviews for The Breaking Point series: