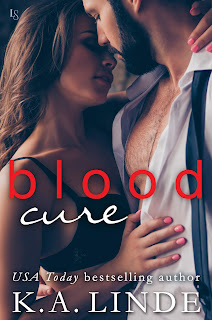 Now that's how you end a series as original and interesting as this one! Bestselling author K.A. Linde's Blood Type series comes to a riveting conclusion with the release of Blood Cure. After that shocker of a cliffhanger in the second novel, Blood Match, I hoped against hope that everything would work out for main characters Reyna Carpenter and Beckham Anderson. Picking up immediately after the events in book two, this series ender finds Reyna at a loss. From the moment she became Becks's blood escort, they had shared an intense connection, one that both of them may have tried to deny and pretend didn't exist, but over the time they've been together, it's only grown stronger. Then their enemies try their damnedest to put a stop to the efforts of a rebellion poised to topple the corrupt and power-hungry members of the vampire elite. But when the costs begin to outweigh the gains, will the loss Reyna experiences lead her to retreat and give up or to rise once again and emerge victorious?

Two things: This series must be read in order, and I'm not going to give away any potential spoilery details about the series as a whole or this third book in particular. Trust me, you'll thank me later when you adhere to the first suggestion and to my holding back on this review. Suffice it to say that Reyna is a heroine who truly comes into her own in, having evolved from being a young woman desperate enough to become a blood escort in order to ensure that her brothers don't go hungry to the woman who finds a greater purpose and the kind of love that inspires her beyond any limitations she once thought she had. And as far as her relationship with Becks is concerned, well, let's just say that she isn't the proverbial sacrificial lamb she once was in the beginning of this series. The author did a really great job with these three books, coming up with a unique paranormal romance as well as a compelling cast of characters. Blood Cure provided the resolution that Reyna, Becks, and their friends deserved. This gets five stars. ♥

Read my reviews for the Blood Type series: