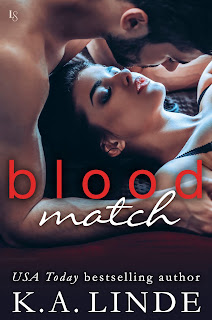 Holy cliffhanger, Batman! Gah! This series is slowly but surely testing my patience and frustration levels because, well, I hate cliffhangers, no matter how much I know that the continuation of the story in the next installment will be worth the wait, as was proven with Blood Match, the second in the K.A. Linde-penned Blood Type series. This sequel picks up soon after the events in the series starter. While human Reyna Carpenter may have walked away from her vampire boss Beckham Anderson, staying away from him for weeks on end was something she had no control over. A power-hungry enemy is intent on keeping Reyna, but he underestimates the human. There are many things that Reyna is unsure about, but the one thing she's more than sure of is that by Beckham's side is where she belongs most. The question is, when all was said and done, will Reyna still have someone to return to?

I wonder if K.A. Linde intended to get her readers and fans addicted to this paranormal romance series of hers. Either way, it's looking like I'm not the only one who's totally hooked on all things Reyna and Becks. I love the air of suspense and mystery wrapped around all the romance. With Reyna being at the very center of this series, I seriously liked how much she's evolved from the naive and innocent girl who was only looking for a way to financially support her brothers to a woman who was coming into her own--someone who was far more independent and resilient, allowing her confidence and courage to strengthen her backbone and try to figure out a way to make her way back to the vampire she had fallen for. And then there was that evil cliffhanger...ugh! I know, I know. It was a necessary, well, evil; I'm already counting the weeks before book three. Five stars for Blood Match. ♥

Read my reviews for the Blood Type series: