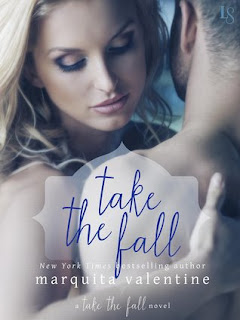 Take the Fall is the first novel in Marquita Valentine's series by the same title, which is a spin-off of her Boys of the South series, but can be independently read. This was my first read by the author and is a second chance romance between Seth O'Connor and Rowan Simmons, who were young and in love at seventeen and sixteen, respectively, but one incident has Seth taking the fall for a crime he didn't commit and while he did it to protect Rowan, anger and bitterness overshadow the love he has for, and he cuts off all ties. Seven years later, all Seth wants is a chance to apologize and makes amends, but it's now Rowan who's enveloped in anger and bitterness and the last thing she wants is to have to interact with him. With his grandmother's passing forcing them together, Seth intends to show Rowan that she's still the only girl he's ever loved, but it'll take more than words for Rowan to believe that Seth is in this for the long haul. Will Rowan be able to let go of her apprehension and give the boy she loves ownership of her heart again?

The most interesting part about this story had to do with Seth landing in prison after he took the fall for Rowan and Jase, Rowan's older brother and Seth's friend, although Jase did end up prison for a much longer amount of time. Even at seventeen, Seth was still a kid and the choice that he made was one he obviously made out of love. He didn't realize the consequences of his actions until it was too late, but then he could have actually spoken up during the investigation and the trial. For him to later blame both Rowan and Jase wasn't fair, especially since I doubt the Simmons siblings said or did anything to pin the blame on him or to even make him part of the guilty party. The thing that I didn't fully understand, though, was why, even after realizing he was wrong in blaming Rowan and Jase two years after he became a marine, it took him as long as he did to own up to it and to reach out to his ex-girlfriend and his former friend. It felt like one more ill-thought move on his part and it was no wonder Rowan held off on forgiving and trusting him.

Now, allow me to confuse you by saying that I wasn't a fan of Rowan's hot and cold behavior towards Seth. Yes, I know I said that her holding off on forgiving Seth was something that was easy to understand, but the hot and cold thing bugged me for quite a while. Sure, it could very well have been a case of self-preservation on Rowan's part, but when she intentionally being obstinate even though she was clearly still in love with him and was taking as much pleasure as she could from him physically, I wanted to shake her and force her to be honest with herself and with Seth. But my moments of frustration with both Seth and Rowan were evidence of how invested I was with these two and how I so hoped they would get over all their issues so that they could finally make up for the seven years they were apart. This series starter also introduces readers to Piper Ross, Rowan's best friend, and whatever is going on between her and Jase had me very curious indeed. All in all, Take the Fall was a rather good and entertaining read. It gets four stars. ♥