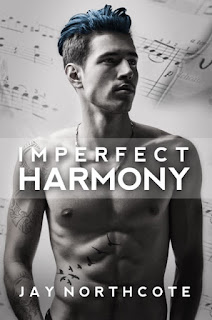 He strummed the chords and hummed the melody, fitting in fragment of phrases as he went. Every now and again, he paused to scribble something down. The minutes stretched out, spinning into an hour, then more. When exhaustion finally rolled over him in a heavy wave, Rhys set the guitar aside to yawn and stretch his aching shoulders. He looked down at the words he'd written and smiled.

Still a work in progress, like the relationship it was based on, but it was starting to make sense. He was nearly there.

Imperfect Harmony is the latest standalone M/M contemporary romance novel written by author Jay Northcote and it takes the May-December romance theme in a refreshingly different direction. It's been two years since John Fletcher lost his longtime partner to a car accident. He suffered yet another loss when his mother passed away a few months back from cancer. His life has been in a holding pattern, still mourning David's unexpected death and living in his mother's house in Lambury. When his neighbor Maggie encourages him to join the community's choir, he does so hesitantly, but his curiosity gets the better of him when he glimpses the choir director, Rhys Callington. Rhys seems to be everything that John isn't: young, adventurous, and exciting. But Rhys shares more in common with John than either of them initially think. With John's love for music stirring within him once again, feelings and desires that he thought were long buried are coming back to life as well. The attraction between them is clearly mutual, but John is worried over their age difference. Is John ready to have a future with Rhys and continue making more than beautiful music together, or will his insecurities strike a discordant note between them?

Love stories that involve main characters with a relatively wide age gap have always interested me. Whether we like to admit it or not, age can't always be relegated to being nothing more than a number. While it shouldn't be the determining factor as to whether a relationship will work out or not, when the difference in age becomes more about the generational gap, it's bound to cause some issues. Of course, it's all about how those issues are dealt with and overcome that becomes key. I know of several couples who have remained together even with their age difference spanning more than a decade or two. I think that it's all about being willing to take that chance and to make the effort in understanding and accepting those differences while also recognizing the similarities you share. John at forty-two and Rhys at twenty-three shared a love for music and both experienced the loss of the first person they ever loved in terrible circumstances that have riddled them with guilt. The nineteen-year age difference is significant, but just like with how they use music in their lives after their respective losses, both men choose to look at the age gap differently. John is fearful of this second opportunity at love while Rhys views it with far greater hope.

I appreciated how John and Rhys's love story played out in a far more relaxed pace than I would have expected. It was overly slow, but it certainly wasn't rushed, because that would have led me to wonder if what was going was merely about lust for either one of them. John is reserved and conservative in his appearance compared to Rhys's more pronounced one, what with his peacock blue coif, tattoos, and piercings. It's highly possible that there are people who would take one look at them and remark how John is probably robbing the cradle, but Rhys refused to let what others thought bother them. These two becoming a couple may not have made sense to almost everyone else around them, but I loved how the improbability of them being together was what made them perfect. Like in music, the combination of one genre with another may seem like a recipe for disaster, but if you listen with an open mind and heart, you'll be able to hear how the harmonies blend well together. I adored John and Rhys and more than appreciated how they rediscovered what they thought was lost to them forever in one another. Imperfect Harmony is easily one of my favorite romances this year, and it makes for a perfect five-plus-starred read. ♥