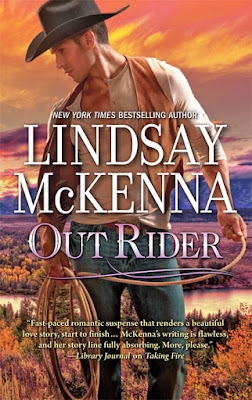 About Out Rider
With her return to Jackson Hole, Wyoming, New York Times bestselling author Lindsay McKenna shows how love can find a way out of the darkness…

A fresh start – that’s all Devorah McGuire wants. As a former Marine and current Ranger with the US Forest Service, she’s grown accustomed to keeping others safe. But when the unthinkable happens, she can only hope that a transfer to Jackson Hole, Wyoming, will allow her to put the past behind her for good.

Dev’s mentor at Grand Tetons National Park is fellow canine handler and horseman Sloan Rankin. He shows Dev the spectacular trails, never knowing the terror that stalks her every move. Despite her lingering fear, Dev feels an attraction for Sloan as wild as their surroundings.

With Sloan, Dev can envision a new life – a real home. Unless a vengeful man fresh out of prison succeeds in finishing what he started.

Read my four-starred review of Out Rider.

Add Out Rider on Goodreads. 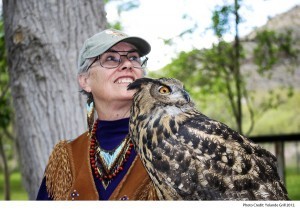 Lindsay McKenna lives her life as a risk taker, and it shines through the books she loves to write: romance, adventure and suspense. She started writing at age thirteen and continues to hone her writing skills to this day. She sold her first romance novel in 1981. The rest is history.

Because she went into the military, this experience became the backbone of her writing—she is credited with writing the first military romance novel (Captive of Fate, 1983, Silhouette Special Edition) and has created a thriving sub-genre within the romance field! As a New York Times bestselling author, she has sold 23 million books and in 32 foreign languages in her career thus far. Her many experiences in the U.S. Navy are backdrop for her understanding of the military in general, and also her very successful Morgan’s Mercenaries, which is an ongoing series in Silhouette to this day! Forty-five books strong!

Lindsay has gone Indie in 2015 and has created a new family saga on par with Morgan’s Mercenaries. It is known as the Delos series. There will be paperback and eBooks created under Blue Turtle Publishing, her company for her fans. Readers who love Morgan and his family are bound to fall in love with the Culver family. Delos is romantic suspense, which Lindsay is well known for. It took her five years to create and bring Delos to her readers. It was worth the wait, but we’ll let you decide that.

Lindsay loves to hear from her readers and loves to know what they’d like to see her write next. Stay up with the latest on the Delos series here. Please visit her website at www.lindsaymckenna.com. And be sure to sign up for her free quarterly newsletter. It contains exclusive content found nowhere else on the Net. Plus, giveaways and other surprises, to her loyal and faithful subscribers!