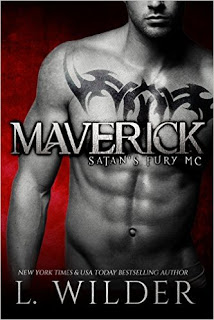 Maverick is the first full-length novel in the Satan's Fury MC series written by L. Wilder and is the story of Satan Fury's new Sergeant at Arms, Maverick, and Henley Gray, younger sister to the club's bartender, Cassidy. When Henley witnesses the murder of an officer of the motorcycle club her sister works for, she becomes a prime target for the perpetrators. The club takes her in to protect her and it's Maverick that's given the job to watch over her. He's moody and grumpy most of the time, and Henley makes it her mission to get the broody biker to loosen up and smile. And when Maverick finds himself doing exactly that, he realizes just how amazing a young woman Henley is. But he's got issues that he need to handle and when a secret is revealed in an unexpected way, will the deception be one too many or can Henley make him believe in love and trust in his feelings once again?

There's a twist in this story and it was one that I suspected from the moment Maverick felt that niggling doubt. Still, it was a devastating secret to find out and the fact that the person involved was someone he trusted could have broken him completely. I liked how Henley wanted Maverick to not be overly serious all the time. Those texts he received were hilarious and quite an ingenious way to poke the bear, so kudos to Henley for that. Both Henley and Maverick are young--she's about to graduate from college, so I'm thinking she's about twenty-two, and he's twenty-six--and I suspect that they're both younger than the main characters from the prequel novella, but neither one came off as immature. One of my favorite parts in the story was when Maverick told Henley to call him Logan when they were together. It was a simple thing but quite intimate. I'm giving Maverick four stars. ♥