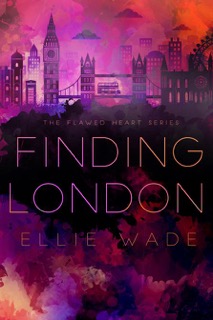 Finding London is the first novel in author Ellie Wade's Flawed Hearts series and is my first read from her as well. This is the story of twenty-two-year-old college graduate London Wright and twenty-five-year-old Army personnel Loïc Berkeley. London is used to getting what she wants, when she wants, and from the moment she glimpses Loïc in his fatigues sitting behind the wheel of his truck, she knows who wants. Unfortunately, Loïc isn't like the other guys she's met before. He doesn't give in to her flirting and turns her down more than once, making it clear he isn't interested in a date or anything else. But the thing is, he is interested but he's never been one to date and has never been emotionally involved with a woman. London may have captured Loïc's attention, but getting him to overcome his issues and insecurities and commit to her proves to be a formidable task. He makes it clear from the get-go that he doesn't see what they have ending in anything more than heartache, but London is willing to risk it all to prove Loïc wrong.

I never had the opportunity to read any of Ellie Wade's past novels and now I'm beginning to think that I've missed out on a number of hidden gems. She's weaved this heartrending tale of love between two people and while the journey to happily-ever-after may be difficult for them, it seems that all the ups and downs will be worth it. My favorite part of this first in a set of three books is none other than Loïc. Like London, he got to me from the second he started his story, parts of which we glimpsed via flashbacks, and he isn't done telling it either. Yep, London and Loïc's love story continues in the second book, which is due for release in June. Now, this first book doesn't necessarily end in an evil cliffhanger, but it's obvious that these two are in for more challenges in their relationship, and I will definitely be eagerly waiting the sequel and cheering them on. So, don't let the knowledge that there is a second book scare you off. This is a novel worth reading and Ellie Wade is an author I have got my eye on. Finding London gets five out of five stars. ♥