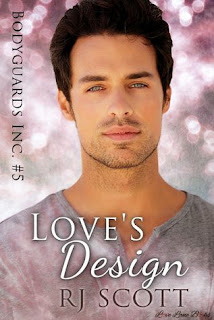 Love's Design is the fifth and most recent installment to author RJ Scott's Bodyguards Inc. series and it's officially my favorite book in the series so far. Readers and fans of BI will recall that CIA Agent Stefan Mortimer was introduced in the previous book, Undercover Lovers, as a longtime friend and former colleague of Bodyguards Inc.'s head honcho, Kyle Monroe. With Stefan still stuck in the United Kingdom due to the events involving the abduction and release of the identity of a renowned scientist, Kyle has him working as a bodyguard, not that Stefan needs the money. Working for BI keeps him on his toes and his skill set in top form. However, when he discovers a young man being mercilessly beaten up by three thugs at a train station, Stefan's instincts kick in and he rescues not just the victim but the victim's young nephew and niece. Stefan is trained to get answers and to have as much information as possible in order to know how to proceed accordingly, but Kirby Devlin is wary and isn't sure what to make of his handsome rescuer.

Twenty-four-year-old Kirby finds himself the guardian of his seven-year-old nephew Andy and his four-year-old niece Louise after his younger brother--the children's father--is viciously attacked and left for dead. After getting beaten up himself, the guardian has a guardian of his own in twenty-nine-year-old Stefan, but Kirby's not immediately sure just how much he should trust the American who claims to be a CIA agent. Since he was sixteen and admitted he was gay to his parents, he's been on his own, having been kicked out and left to fend for himself. He doesn't ask for help easily, but in order to make sure Andy and Louise are safe, he knows he's going to have to take the help that Stefan is generously offering him. He's also unsure as to what kind of guardian he can be to his brother's children, what with him not exactly having a permanent home and with his finances still unstable. Add to that the man who gives him a great deal without asking for anything in return, and Kirby wonders if he can truly make a go of this new change.

I adored Stefan and Kirby's love story, and it had a lot to do with a fact that it was this slow burn romance that happened in a matter of days. Yes, that may seem short to some, but with everything that they were facing and experiencing while trying to stay one step ahead of the men that were after Kirby, his brother, and the two children, becoming as close as they did was to be expected. When I say close, I don't mean in a romantic or intimate sort right off. Stefan and Kirby became friends and confidantes, and I enjoyed reading along as Kirby opened himself up to trusting his life and that of his nephew and niece--and then later on his body and his heart--to Stefan. An unexpected bonus was having the other couples previously featured in the series making appearances here, and I'm thinking we've got the Christmas theme to thank for that. In the month and a half since I first came across this series, it's become a favorite and author RJ Scott is now a go-to author. I'm excited for the sixth BI book this April 25 and give Love's Design five stars. ♥