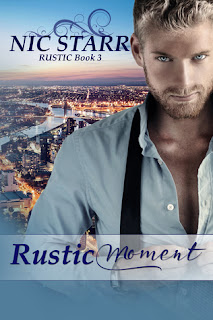 Three books in a row and now that I've finished the series--because this third book did feel like the end even though I'm sort of wishing and hoping that maybe it isn't--I've officially become a fan of Nic Starr's. Her Rustic series had that perfect balance of heat and heart, weaving together three stories, each one that can stand proudly one their own but together they're even all the more enticing and engaging. Rustic Moment ends (again, I'm just assuming here) the trilogy on just the right note, with a story about finding love and acceptance within yourself and with one who loves and accepts you as you were, are, and may be.

After discovering that his boyfriend was having an affair with his business partner, who also happened to be embezzling money from their company, Grant Parnell is struggling to set his life aright. He's trying to cover the missing funds to make sure his interior design business stays on track and he's kicked his ex out, although he hasn't seem to have gotten the message that things are over. His perfectly crafted life is out of sorts and trying to hold things together is proving to be way more difficult than he thought possible. The arrival of a house guest in the form of Dave Monroe offers the hopeful glimmer of something wonderful.

Dave Monroe has always enjoyed being a cabinetmaker, putting his hands and expertise to good use. Moving to Melbourne from Armidale for a new job could be the beginning of setting up his own business, especially in a city that has older homes for him to work on. Taking Grant Parnell up on his offer to stay in his home was an opportunity Dave couldn't pass up, especially if it allows him to get to know Grant much better and maybe they can share more than that one kiss back in Armidale. The connection and friendship between them grows stronger each passing day, but Dave can't help but wonder if he fits in Grant's world.

They may not be as different as one may think them to be upon first sight, and there's no denying that they're perfectly matched in all things intimate, but when the outside world rears its ugly head, the differences become even more pronounced and far more difficult to pretend they don't exist. Grant wants the world to see a certain version of himself and the life he's created, but all Dave wants is the Grant he sees when it's just the two of them, or the Grant that allows himself to relax and enjoy time with their real friends. Can Dave and Grant find some middle ground in order for them to now share their lives together?

The prologue in the story sets the stage in explaining why one of our main characters--I won't say who but it won't be difficult for you to figure out which one--is the way he is. This is a story about how overcoming the past isn't simply about becoming successful; getting over the past involves truly being free of those shackles that keep us bound to the hurtful memories. It's about taking those painful events and using them as motivation to move beyond and then letting them go. Dave and Grant teach each other to value the person they are today and that they are no longer alone in the world. Rustic Moment receives five stars. ♥