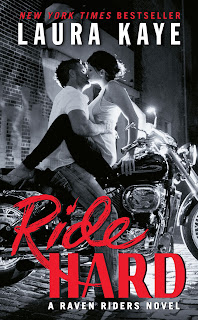 Dare's hands stroked her back, his eyes suddenly softer, unshuttered, uncertain. He pulled her closer until their foreheads touched. "What are you doing to me?" he whispered.

Haven's heart tripped into a sprint, because the words held so much emotion that it made her heart ache with something a whole lot stronger than affection for him. "I don't know," she whispered back. "But you're doing it to me, too."

When bestselling author Laura Kaye ended her highly popular--and one of my all-time favorites--Hard Ink series and promised fans and readers a spin-off, I was anxiously counting the days before I could check the first full-length novel. After all, the Hard as Steel prequel novella just gave a teeny, tiny glimpse of the world of this motorcycle club, and we only got bits and pieces of them from the time Dare Kenyon and the Raven Riders MC were introduced in Hard as You Can and then on to the rest of the books in the series. Since I loved Hard Ink as much as I did, my expectations were rather high for the Raven Riders spin-off, although I had to remind myself to try and be fair and to keep an open mind. Well, I finished the series starter, Ride Hard, and it's aptly titled because Dare Kenyon and Haven Randall's love story rode me hard from the very beginning and refused to give me much of a respite till the end. If you've read your fair share of MC romances, expect the unexpected with this one because the Raven Riders MC is a cut above the rest.

Let me give you a brief backgrounder on how our two main characters are thrown together. Twenty-two-year-old Haven Randall is on the run. Abandoned by her mother when she could barely walk, she's lived with her father's abuse for years, but when she's told that she'll be married off for the sake of an alliance with another criminal organization, Haven decides it's time to leave and live. With her best friend Cora Campbell by her side, they leave Georgia, but while in Maryland, they're abducted by a gang that's ready to trade Haven in for reward money. Rescued by Shane McCallan and given shelter by the rest of the Hard Ink crew, Haven and Cora are later taken in by the Raven Riders MC by way of Ike Young, tattoo artist with Hard Ink and a member and the betting officer of the Raven Riders. This MC isn't your run-of-the-mill club, with wannabe one-percenters who deal in all things illegal and treat their women like outsiders when it comes to club matters. These men run their club with purpose and Dare Kenyon is their president.

Both Dare and Haven have had fathers they wish they were never born to. Taken under his grandfather's wing after having left his home when he was fifteen, Dare has made sure that he lives by the promise he made that the Raven Riders will never be anything like his father's club. Haven needs the club's help and Dare is ready to offer assistance in any way he's able to. What he isn't quite ready for is his reaction to the young woman. She seems so innocent and the fifteen-year age difference should be enough to stop him from pursuing her, but try as he might, he simply can't stay away from her for long. But can anything really come from their being together? Dare knows that the best thing for Haven would be to get away from the area and create a whole new identity for herself, but the more time he spends in her presence, the more difficult it's getting to be to let her go. For the first time, Haven knows what she wants and it's to be with Dare and the Raven Riders, but will she sacrifice her own happiness for those she now thinks of as family?

My notebook was filled with pages of notes while I was reading the book. Dare and Haven may seem like an unlikely couple--she's the soft to his hard--but they have a bit more in common than you would initially suspect. I really, really, REALLY loved these two together. They just made such sense to me--Dare gave her a sense of freedom that allowed her to truly begin living, and Haven gave Dare the light to see through the darkness that was still shadowing him. I did have a question lingering in my head and maybe it's just me overthinking things but I couldn't help but wonder about Kyle, Dare's older brother. I can't go into too much detail, but my curiosity concerns what happened to him and if it was ever confirmed, especially since Dare didn't really see with his own eyes the events in their home that day he left. I know, I know. I could be paranoid, but hey, it caught my attention and my imagination, so I had to put it out there. I certainly wouldn't mind if my suspicion is proven to be correct, but even if it isn't, I'm quite hooked, so no worries.

For a series starter, this worked perfectly because readers will get to meet other significant members of the MC. Those who caught my attention were Maverick Rylan (Dare's cousin and the vice president), Phoenix (no last name and the ride captain), Caine McKannon (sergeant at arms), Jagger Locke (race captain), and Sam "Slider" Evans (a widower and single father to two boys). There's also Cora, Haven's best friend, and the appearance of Maverick's ex, Alexa Harmon, piqued my curiosity as well. The series won't be lacking in terms of people to feature as everything progresses. There's also a potential series arc with the Raven Riders going up against the Iron Cross MC, a new and potentially dangerous club looking to take over where the Church gang left off. Wherever Laura Kaye takes the Raven Riders to next, I'm more than ready to go on that ride with her and with them because it's already started as a hell of a ride to remember. Ride Hard is one of the best MC romances I've ever had the honor of reading. Five-plus stars. ♥