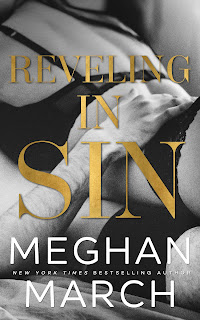 “I will never deserve you,” I tell her as I wipe the tears away from her face. “But I'll never stop trying.”


Oh wow. There were revelations in this third and final book in the Sin trilogy that caught me off-guard, but there was one in particular that left me absolutely speechless because I never saw it coming at all. Reveling in Sin wraps everything up, and while Lincoln Riscoff and Whitney Gable's love story does end quite happily, the road getting there was never easy. As always, Meghan March put her main characters through their paces twice over, making sure they earned they happy ending, and guess who gets to reap the rewards? Every single reader of the Sin series.

As is the norm when it comes to my reviews for March's books, I'm going to give the bare minimum in hopes to not let any spoilers out. This third book picks up right where the second one left off, and Linc and Whit are dealing with shocking news only to be hit with far more than either of them anticipated. Neither of them has loved anyone as much as they love each other, but can a Riscoff and Gable really come together, and what sort of reception would such a union spark within their respective families? How far will someone go to wreak havoc on both these clans?

From the romance to the suspense and all the drama involving the two feuding families, there was never a dull moment with any of the books. Linc and Whit did their fair share of coming to terms with the years they lost, and here, they had to decide if they were going all in with one another. I need to make a special mention of the Riscoff and Gable patriarchs--Commodore and Magnus, respectively--and have high hopes for stories for one particular couple plus one male main character (totally not mentioning names here!). I'm giving Reveling in Sin five-plus stars. ♥