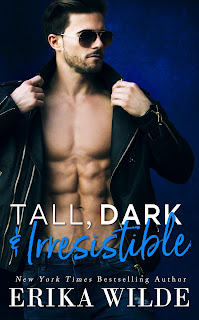 Erika Wilde gives readers the second book in her Tall, Dark & Sexy series, entitled Tall, Dark & Irresistible and is all about the middle Stone brother, Leo. It's been some time since he's been the driver doing the pick-ups thanks to his co-owned, San Diego-based car service business being as successful as it is, but when Leo Stone receives a request that he fetch a client named Peyton Bishop at the airport, he can't deny that curiosity gets the better of him. Once there, he's surprised to see a face he recognizes--Peyton was his lab partner when they were both juniors in college. Surprise turns to shock when Peyton tells him of her predicament. She's been lying to her parents about having a boyfriend in order to show them that someone's watching out for her while living in New York. The boyfriend? Well, it's none other than Leo and she's even got the Photoshopped photos to prove they're in a committed relationship! When her parents insist that she bring him along to her cousin's wedding, Peyton has no other option but to ask Leo to play along, but as fake as their relationship is, it all start to feel real soon enough.

Fake relationship romances don't always rank well with me, mostly because so many of them feel so contrived and we all know that fake turns to real by the end of it all. That being said, I can't help but be impressed when such a well-worn trope is given a few creative touches by an author, and they end up writing a story that not only captures my attention but my heart as well. Such was the case with Erika Wilde and her newest release. I liked Leo and Peyton from the get-go, but I was also happy that there wasn't too much awkwardness between them once they saw each other and that there wasn't a lack of recognition--feigned or otherwise--on Leo's end and that Peyton hadn't been secretly in love with him all this time (because a crush is not the same as being in love, people!). The whole mutual crush thing was adorable, and four years after they were lab partners and kinda-sorta-maybe friends, I liked that the connection they shared leveled up to something far more potent and life-changing. Tall, Dark & Irresistible made for the perfect Sunday read, and I'm giving it five stars and can't wait for book three! ♥

Read my reviews for the Tall, Dark & Sexy series: