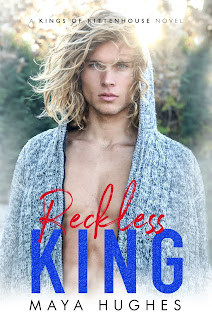 Reckless King is the second full-length novel and third release in the Kings of Rittenhouse series penned by Maya Hughes. This is Heath Taylor's story, and while the twenty-two-year-old is a beast when it comes to the sport he loves, it takes a beauty with brains to turn his world upside-down. When Heath meets the gorgeous Kara Ellis in a bar while he's out with his friends, he's immediately taken by the twenty-three-year-old graduate student. They go on to share the first of several unforgettable romps that feel like the beginning of more. And then Heath shows up to one of his classes and finds Kara in it...as his instructor. It quickly becomes obvious that whatever it was they were gearing towards needs to be put to a stop, what with his hockey season and her career potentially falling apart should they pursue a relationship. But try as he might, Heath can't get Kara out of his head, and he's pretty sure she's befallen the same depressing predicament. He knows the risks, but Heath is playing to win, not just time with Kara but her heart as well. It may be reckless and it may be crazy, but Heath knows that Kara will be worth it.

I liked Heath in the series starter and I was glad that his own story didn't disappoint! He and Kara shared great chemistry together, and I felt that they had the sort of connection that I look for. The complication regarding their budding romance is one that I've come across in many other books in the past, so in terms of originality, this was certainly nothing new. However, I still enjoyed reading the story as a whole, especially with such a fun cast of supporting characters. The book is paced pretty well, although it did feel a tad slow in the middle part, with the whole teacher-student angle being made into a bigger deal than it honestly should have been. Heath and Kara were already together even before Kara started teaching, and in quite a number of colleges and universities, personal relationships like theirs with an already established connected would have been accepted had they gone through particular steps with the administration. But it is what it is, and at the end of the day, Reckless King still made for a pretty entertaining read and has me more than curious about the couple to follow. This gets four stars. ♥