Review: A Position in Paris by Megan Reddaway 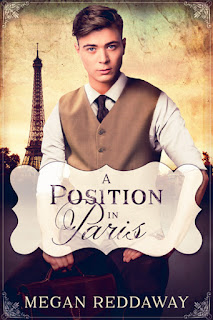 A Position in Paris is a post-World War I M/M romance and my second read from Megan Reddaway. Written in epistolary form--a combination of journal entries and correspondence from the pens of both main characters--this is the story of twenty-nine-year-old James Clarynton, more formally known as The Honourable Lieutenant Colonel J.B.V. Clarynton, VC, and his private secretary, twenty-one-year-old Edmund Vaughan. James served during the war, passionate about fighting for something he truly believed in. But that war took from him, and even a year after he had no choice but to leave the British Army, he lives with the constant physical reminders of what he lost and what remains. His closest friend recommends that he focus his energies on writing a book and aids in finding a suitable secretary to help in his endeavors. In steps Edmund, a young Irishman who has a wealth of secrets he keeps hidden behind his shy and quiet demeanor. Over the next few weeks, the two men form a bond of sorts, one that belies far more amorous hopes and affection. When their respective pasts come calling, will they go their separate ways?

This was a rather good read, a slow-burn romance that was more subtle and simple yet had an air of sweetness to it. There was a lot of tip-toeing going on between James and Edmund, but then one must try to remember that this was in 1919, and even though they were in Paris, France, the fact is, they were both men and James attempting to court Edmund wasn't as simple as him handing over flowers and taking him to the theater. So yes, the subtleties were realistic and came off as rather endearing, especially when there was that awkwardness between them, unsure as to how they should act in each other's company and pretend they wanted more. I must say that I was caught by surprise when it came to Edmund not being open about his personal history, more so that there was more to it than meets the eye. The story was a good one, as was the supporting characters, each of whom helped to make this even better than I could have hoped for. A bit slower in terms of pace than I would have liked, A Position in Paris still won me over with Reddaway's writing and a tale worth telling, making this a 4.5-starred read. ♥

Purchase A Position in Paris on Amazon.