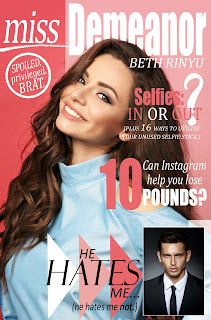 My previous reads from Beth Rinyu leaned towards the angsty--which I'm unashamedly a fan of when it comes to my romance reads--so when I read the blurb for Miss Demeanor, it sounded more like a romantic comedy. I'm always one for when an author mixes things up, and my curiosity was piqued, so I dove into Rinyu's latest release heartily. Her new standalone is about twenty-seven-year-old Rose Perkins who has no qualms coasting on her parents' dime while barely making an effort to find a job a month after she got her graduate degree. Her father takes matters into his own hands, informing Rose that they're cutting her off and she's to live with her aunt in New York while working at a publishing house owned by a friend of her father's. This wasn't what Rose wanted, but she was going to make her father see he underestimated her. New York was her favorite place to be, and she's sure she'll find a job that she likes while also snagging a wealthy bachelor to call her own. She was excited about the possibilities, but the one thing she wasn't excited about was having to work with twenty-eight-year-old Alex Andrews. He hates her and vice-versa, and they think they know pretty much all there is to know about each other. Once they learn how wrong first impressions are, however, will they cross the too thin line between love and hate?

I'll be honest: I struggled with this book. From the moment Rose's character was introduced, there was very little about her that was worth liking. She was spoiled and thought she was owed the world. She was rather immature and wasn't all that even with her graduate school experience. I understood why Alex and other people at the magazine weren't fans of hers, what with her getting her job as a favor to her father. Clearly, humility wasn't really something that came to her naturally, and I struggled to find something--anything!--about her that I liked. Then there's Alex, who, while slightly more likable, tried to be this guy with a strong personality, yet got all whiny and pouty whenever Rose acted like her feelings were hurt. And see, this is where it becomes difficult for me to truly fall in love with the story: when I fail to connect with at least one of the main characters, my head and heart can't wrap themselves around what I'm reading. By the time Rose got off her high horse, I just wanted to finish reading Miss Demeanor because I hate DNFing. The basic story was okay; the main characters? Not so much. Three stars. ♥