Review: The Left Side of Perfect by Meghan Quinn (Perfect #1) 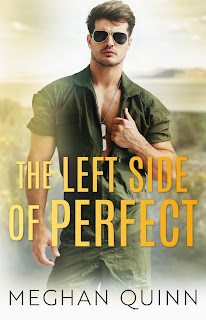 I've been waiting for Colby Brooks's shot at his own happily-ever-after after the shocking turn of events in the first duet, The Blue Line, which has now spawned Meghan Quinn's newest one, Perfect. In The Left Side of Perfect, Colby's first love continues to be flying. He's as passionate as ever about the planes he flies as part of the US Air Force, and he's had little time to become romantically involved with anyone, his last relationship being that with the woman his best friend has just married. He finds himself spending time after the wedding with his ex's best friend, Ryan Collier. She's fun and flirty--an all-around great girl who hasn't had much luck in the love department, seeming to date guys who don't stick around. After the couple of days they spent together in Colorado, Colby returns to his life in Nevada, but months later, Ryan's made a life change that takes her Vegas, and the opportunity for their friendship to flourish is clear and present. But then a different opportunity comes about, one that has Colby proposing marriage to the woman he loves and adores--his sweet and wonderful girlfriend, Sage Guthrie...

Now, before anyone protests and says, "SPOILER!!!", let me just point out that Colby and Ryan already had their first "moment" in the epilogue of The Downside of Love, which already clued a whole lot of people into her being the female main character for this spin-off duet. Of course, if you've already read the original duet, then you know that Meghan Quinn threw one hell of a curve ball at the end of the first book and the direction that the second book took. Some liked it, others didn't, me belonging to the latter group. So naturally, the possibility is always there that she was going to add in her own twist to this new duet. I read these books one after the other overnight--literally switching from book one to book two right after midnight. While I have mentioned the names of the two women that Colby becomes involved with one way or the other--i.e. Ryan and Sage--it's also kinda-sorta-maybe hinted in the blurb that he's conflicted, especially if you're the type to read between the lines. But that's all I'm going to say for now, and while this does end with a cliffhanger of sorts, The Left Side of Perfect was five-star read. ♥

Purchase The Left Side of Perfect on Amazon.