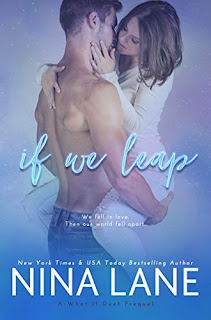 Bestselling author Nina Lane introduces fans and readers to her newest couple in a familiar setting by way of If We Leap, a prequel novella currently available for free on e-retailers and the opening salvo in her What If series. The first time Josephine Mays saw Colton Danforth, she was eight and he was eleven. Cole had just moved to Castille with his parents, one of whom happened to be rather abusive, and hometown girl Josie had two loving parents plus an older sister who was also her close friends and an older sister and a younger brother that ensured life would never be boring. As the years would pass Cole would prove to be her hero, stepping in to save her more than once, could the boy she's had a crush on become the man who would lay claim over everything that Josie is?

Prequels don't just provide backstory or bonus introductory material; they're meant to whet a reader's appetite so that they're eager to read the full-length novel that continues the story. I know how gifted a writer Nina Lane is because I've read most of her books and loved them, but the woman never ceases to amaze me. There was that inkling of promise as to what Josie and Cole's story would be, enough that I was desperate to get my greedy hands on the first full-length novel in the series, which, of course, at the time wasn't available yet. So, kudos to Lane because this novella had me beginning to invest in Josie and Cole and their love story as well as leaving me itching to continue their story as soon as humanly possible. Well played, Nina Lane. Well played. Five stars for If We Leap. ♥

Download If We Leap for free on Amazon | B&N | iBooks | Kobo.