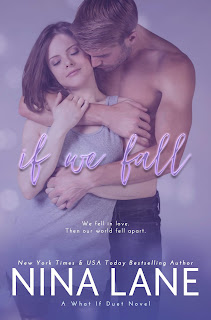 “I loved you before we were even born.” He pressed his face to my hair. “I'd never leave you, not if I didn't have to. You will always be my best friend, and wherever you are in the world, whatever happens, please believe all I ever want is for you to be safe and happy. I'll do anything for you except stay. Anytime, anywhere, for as long as we live. Anything. Remember that.” He detached himself from me slowly, bent to kiss my check, and whispered, “I love you, my Josie Bird.”

Oh. My. God!!! This book! That ending! GAH!!! It is so not fair that Nina Lane lulls me into complacency only to leave me agog with a cliffhanger ending of epic proportions. Okay, maybe it's not about fairness, plus I pretty much had a feeling readers would get a cliffy simply because her What If series is a duet, and the first book usually ends in a cliffy. But wow, here I am, a whole lot of time later, and I'm still affected by what I read in If We Fall. If I was only starting to become invested in Josephine Mays and Colton Danforth's love story in the free prequel novel, If We Leap, I'm absolutely all in now. Heck, I was all in within the first several chapters of this full-length series starter.

At eight and eleven, respectively, Josie Mays and Cole Danforth's connection was forged. Over the years, their paths would cross time and again, and even though those moments were often fleeting, their effect was lasting. At nineteen and twenty-two, long-held feelings flourished, coming to the forefront, and inspiring Josie and Cole to take a chance and leap into being together. But fate can be cruel and a year later, their lives would irrevocably change. He walked away from her, believing what he did was necessary--to make sure she was more than okay...that she lived. A decade later, she's back in Castille, and as much as Cole still wants her, he wants her gone even more. What he doesn't realize till then is that ten years ago, they fell into an abyss and have yet to resurface.

Would it be too presumptuous of me to mark this series as one of my favorites for the year even though it's technically not even done yet? After reading the novella, my expectations for the first novel were at a high; after reading this novel, my expectations for the final book skyrocketed into the stratosphere. I seriously liked Josie and Cole before, but I love them now, and these two have been through hell and are still caught somewhere back there, trying to make their way towards a possible future together, even though they're taking things one step at a time. The romance was unquestionably remarkable, but that element of suspense? Give Nina Lane a standing ovation, folks, because the discovery she makes at the end was one I never saw coming. I've got theories going forward, but whether I'm right or wrong won't matter. I simply want If We Fly ASAP. Five-plus stars go to If We Fall. ♥