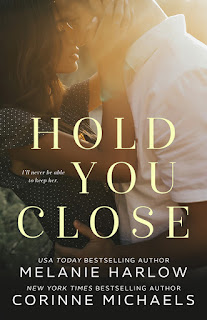 Confession time: My last reads from both Melanie Harlow and Corinne Michaels were not favorites of mine, ranking lowest on lists of books of theirs that I've read--although if we're being totally honest here, they weren't terrible reads, simply stories that didn't meet my personal expectations, and when it comes to these two authors, expectations are always high. So imagine how lofty those expectations would be if you find out these bestselling and fan-favorite authors were writing a brand-new novel...together! Of course, when it comes to power pairings like this one, there's also a bit of anxiety that accompanies it precisely because of those expectations I mentioned. However, I'm quite happy to report that Harlow and Michaels's first outing as a writing duo was rather impressive.

Hold You Close is an enemies-to-lovers romance that's got a snarky sense of humor with just enough angst to keep an addict like me quite satisfied. London Parish had crushed on her best friend's older brother for years, and when they shared one special night together, the seventeen-year-old thought this was the beginning to a romance that would last a lifetime. Unfortunately, it only lasted several hours because the next time they saw each other, nineteen-year-old Ian Chase broke her heart, thus triggering a cold war that becomes their status quo for the next seventeen years. And then, the unthinkable happens, leaving Ian the designated guardian to his nephew and nieces and London his designated back-up. Ian doesn't seem like the best choice--not with his playboy lifestyle and business--but he'll do anything to hold his family close...maybe even get close enough to the girl he's always loved.

If you've never read anything by either Melanie Harlow or Corinne Michaels, then I'm going to highly recommend that you read Hold You Close. Both authors have proven time and again how adept they are at writing the kind of love stories that stay with their readers long after they've reached "The End", and this joint effort of theirs certainly had me thrilled after my most recent individual reads from them. I loved the story and how there were moments where my heart squeezed in empathy and then times where I wanted to tear my hair out at how frustrating they were, acting more like teenagers than the thirtysomethings they already were. The latter is also, basically, why I held back on giving this five-plus stars, but allow me to reiterate just how strong the writing was and that the cast of characters as a whole is one of more memorable ensembles I've come across in a good, long while. There were laughs and there were tears and there was one hell of a good read. Hold You Close is a fantastic, five-starred read. ♥