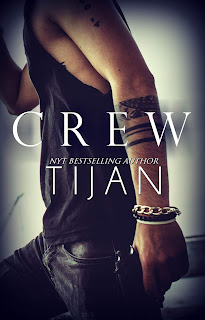 “My 'guys' aren't here to save the day,” I told her. “My crew is—which includes me. I'm not just the girl in their guy group. I'm one of them. They bleed, I bleed. I am here to save the day, just like they are. You get it? You're talking to me like I'm one of you. Like I'm a fucking pretty princess who can't fight her own fight. I'm not. I'm crew. Are you following me?”

Tijan first won me over with my very first read from her—Carter Reed—about five years back, and my reads since have been constantly impressive albeit few and far between, sadly enough, having only followed that up with Anti-Stepbrother, Love to Hate You, Ryan’s Bed, which is one of my top reads for 2018, and Bad Boy Brody. So, obviously, I’ve missed out on a lot of her stuff, particularly a couple of her well-known young adult (YA) series, but I AM planning on rectifying that soon by catching up on whatever I’ve missed one book at a time. While I need to work on Tijan’s back list, I am happy to say that I have, more or less, kept up to date with her more recent releases, and her latest one, which also happens to be the first in her brand-new YA series, has simply given me that additional push to get through her past published work faster. Readers are introduced to a world where high schoolers are either one of the “normals” or is part of one crew.

Crew is book one in the author’s new series by the same name, and while it may be young adult thanks to the main characters and most of the rest of the cast, it does carry with it a heavier theme and there is an overall darker feel to it. I don’t want to give away anything in terms of story line, so hopefully, the basics will suffice for those of you who are curious about the book. The school and neighborhood that the story is set in has crews, and by that I mean more in the same vein as gangs than your typical high school cliques. These crews live by their respective codes, but there’s also an established set of rules governing all the crews in general that each group and every member must abide by. When it comes to the Wolves Crew—made up of high school seniors Jordan Pitts, Zellman Greenly, Cross Shaw, and Bren Monroe—one rule has been in place since they were in seventh grade: No falling in love within the crew. Yeah, right. Easier said than done.

At the center of this story is Bren, a heroine who may only be seventeen but she’s got nerves of steel and a spine made out of titanium. However, she’s also got her own set of demons and they’re not the kind that you can simply wish away or can be put to rest after a talk or two. Her loyalty is to her family and her crew, which also happens to include her best friend. I’m not going to say who it is, but he’s mentioned pretty early on in the story, so it’s not as if it’s a spoiler. I just prefer to have people go into the book with a hint of what awaits them because trust me, this isn’t your typical YA story. Yes, there’s a romance, but this series starter really is about love, family, and friendship, and how there are times that family isn’t limited to just the ones who share your DNA. This also has quite a few supporting characters, but majority of them have marked appearances. Crew does end in a cliffhanger, but I believe good things come to those who wait. Five-plus stars. ♥