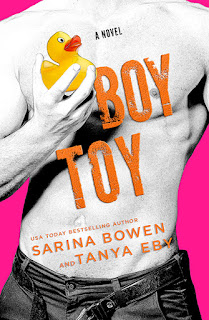 “Jesus Christ,” she whispers. Her hands have stopped on my abs. “I could play patty cake with your chest.” I'm not sure what she means, exactly, but she's sort of slapping my chest, and I'm okay with that.


I'm sorry to do this to Tom Spanner and Sebastian Braht, the male main characters from Man Hands and Man Card, respectively, but I had to knock them down a spot or two to make way for my new favorite from this series AND my current pick as the book boyfriend to beat all boyfriends--Liam MacAllister. His story is told with hilarity and heart in the third Man Hands novel, but if you've yet to read the first two books, fret not, my fellow bookaholics out there, because Boy Toy--just like its predecessors--can absolutely be reads as a standalone (but hey, do yourselves a favor and check out these three romantic comedy gems because Sarina Bowen and Tanya Eby tickle your funny bone and tug on your heartstrings while also providing enough tension and heat to require your AC be turned on.

Being a single mother isn't easy. Just ask thirty-four-year-old Sadie Mathews, career woman and mom to two-year-old twins Kate and Amy. She's not above asking for help, and the new daycare she brings her daughters to could be a godsend...until she sees the guy tasked to take care of them, and oh God, someone send her some self-control. The last time Sadie saw Liam MacAllister, he was a sweet fourteen-year-old who had an air of maturity to him, the eldest among the siblings Sadie was babysitting back then. Fifteen years later and time has been more than good to Liam, growing up to be gorgeous on the outside while still maintaining that giving heart and kind soul of his on the inside. Liam would love nothing more than to make all his teenage fantasies finally come to fruition, but what will it take to convince Sadie that he's no longer a teen boy and his heart isn't something to be toyed around with?

This book was just...everything! I laughed and I smiled and I squeed with delight, and yes, there was a point in the story where my heart clenched in empathy for the situation that Sadie and Liam found themselves in. I'm not going to tell you what it is because, hello, I refuse to spoil it for anyone. I seriously love the lighthearted feel of the book and the fun-filled romance that Liam and Sadie were immersed in. I also adored the fact that her besties who have found their own happy endings with their respective men were present and accounted for and brought levity and logic into the mix. Sarina Bowen and Tanya Eby outdid themselves with this book, and I'm hoping this won't be the last these two join writing forces. I'm highly recommending Boy Toy and awarding this 2018 favorite five-plus stars. ♥