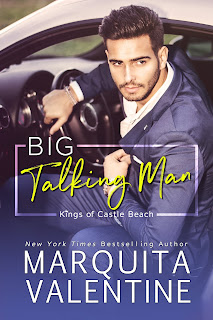 We return to Castle Beach with the release of the second book in Marquita Valentine's Kings of Castle Beach series entitled Big Talking Man. Crushing on your brother's best friend is nothing new. Heck, falling in love with him isn't much of a shocker either. But when he becomes your biggest secret and part of the reason for your biggest regret? Well, Quinn King is still dealing with the aftermath. As if falling for her older brother's friend wasn't complicated enough, the fact that he's none other than the Tate Prescott, Hollywood's hottest property, whether as a then-actor and now a sought-after director, adds extra layers of complications that required additional stealth on both the parts of Quinn and Tate. Theirs wasn't a fling; Tate and Quinn truly loved each other, but keeping their relationship as far away from gossip rags and tabloids was a necessary evil. But when an unthinkable tragedy to the King family saddles Quinn with an insurmountable barrage of guilt that takes residence over her entire being, the one person she needed by her side walked away. Four months on, Tate is back, but is there anything to return to?

I confess, I wasn't as big of a fan of this second book as I was of the first. I understood that Quinn--and her entire family and community--continued to mourn the disappearance of her brother Laird, and I got why it weighed on her more heavily than maybe her other siblings, but goodness, there were times I was tempted to shake her so that she would see some much-needed sense. Ugh. She was frustrating for a lot of the book, and if this were real life, I would have probably asked Tate if all the headache and heartache was worth it. However, I do love me a happily-ever-after, and in the midst of the loss that their entire family is still experiencing, each of the Kings are finding their way to love and happiness with their significant others. That being said, I've had this...theory in my head when it comes to the missing King sibling since the first book, and I'm curious to see if it'll play out the way I see it or not. In as much as I wasn't a huge fan of Quinn's, I did like Tate and I liked the original direction the author decided to take the story in Big Talking Man on, which is why it earns four stars and look forward to the next one. ♥

Read my reviews for the Kings of Castle Beach series: