Book Spotlight: Do or Die by June Faver 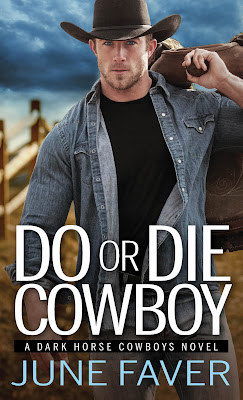 Cowboy musician Tyler Garrett has a once-in-a-lifetime chance to put aside his rough-and-tumble rancher’s lifestyle and realize his dream. He’s on the road to Dallas to record a demo when that dream gets kicked sideways by a beautiful woman on the run.

Leah Benson will do whatever it takes to keep her daughter safe. But when her dangerous past catches up with her, she needs a hero—and luckily for her, Tyler Garrett was born and bred for the role.

Add Do or Die on Goodreads.

An Excerpt from Do or Die Cowboy
Tyler Garrett drove away without looking back. Truth is, he was afraid to even glance in the rear-view mirror for fear he would turn his big Ford extended-cab truck around. Of course, he was hauling a trailer with the finest quarter horse ever bred, so turning around on that two lane road might have given him a little trouble…but then, trouble was what he did best.

Ty was the middle son. The one who invented the word ‘trouble,’ at least, according to his dad. No one could deny that “Big Jim” Garrett thought the world of his three sons, but somehow it was always Ty who inspired him to call out, “Here comes trouble.”

He reached the end of the farm-to-market road and idled, looking both ways for traffic, but of course, there was none. With a deep sigh, he hooked a wide right, allowing for the trailer to arc out behind him as he pulled onto the Interstate. He straightened his shoulders and thought about his destination.

Dallas, where Ty would take the first step in making his own dreams come true. Where he could polish his talent and live up to his mother’s aspirations for him as well.

He frowned, his grip on the steering wheel tightening. Too bad Mom didn’t live to see this day. She always believed in me.

A lump formed in his throat as he pictured her sweet face. She was the one who never failed to show up at the talent shows, looking pleased and applauding like crazy. Making her proud had been one of his prime motivators.

Big Jim, on the other hand, just shook his head and said, “That singin’ stuff is nice and all, but you need to concentrate on your true callin’, boy. You were born to be a rancher. It’s in your blood.”

Ty sucked in a deep breath and blew it out. Well, he’d done what he could to make that happen. He graduated from Texas Tech University with a degree in Agricultural Economics and Range Management. He devoted years of his life to making his dad proud of him, but ranching just wasn’t in his heart.

His mother’s last words to him were branded into his memory. She had placed her hand on his cheek and gazed up with love in her eyes. “Follow your heart, Ty. Not many people are blessed with the talent the good Lord gave you, so you need to make the most of it.” She lapsed into a coma and passed away the following day.

Ty owed it to her to make it big. And Dallas was just the launching pad. His friend, Will, had a recording studio and was going to cut a demo for him. Then, Ty was set to try out for the Texas Country Star television show. If he made it through to the state finals, he would go on to compete in the Nashville Idol contest. He was pretty sure he had a good shot.

Ty’s departure was taking place a few days earlier than planned. Will had studio time available the beginning of the next week, but after the morning’s blow-up with Big Jim, Ty decided to head for Dallas and just hang around at Will’s.

He drove east, oblivious to the flat, north Texas countryside. His head was someplace else, but, without much effort, he filled the truck with his strong voice, singing one of his mother’s favorite gospel tunes. He could see himself on stage, performing for the Nashville audience. For the world…

The town of Langston appeared on the horizon. He thought he should stop and grab lunch before the long drive to Big D. It was a fairly small town, so there weren’t many choices. He passed a Dairy Queen and Tio’s, a Mexican restaurant, before pulling in at Tiny’s Diner. He parked where he could keep an eye on his rig and climbed down out of his truck.

Funny to think he was really on his way. With all of his dad’s wealth, he had only taken what was important to him. His horse, his guitar and a few clothes. ‘Cause I’m sure not going back.

A metal cowbell clanked against the glass door when he entered the restaurant.

“Hello, Tyler,” Crystal called out. She was a fixture here at Tiny’s. “Table or booth?” She grabbed a menu and waited for his answer.

“Table near the front window would be best.” Removing his Stetson, he raked his hand through his thick, dark hair.
She walked him over to the window and placed the menu on a table for two. “Iced tea?”

“That’ll be good.” He set the Stetson on the other side of the table and took a seat facing the door. When it opened, he had to check out the new arrival.

His breath caught as his gaze fell on one of the prettiest women he had ever seen. She wasn’t exactly what one could call hot, but when she paused in the open doorway, he felt like he’d been kicked in the gut.

Her large, wide-set brown eyes reminded him of a fawn, or perhaps it was her blondish-brown curls, swept up in an untidy gob at the crown of her head. Definitely had the air of a skittish animal, not quite tame. Her threadbare jeans had a rip on one thigh and she wore a tank top with an over-sized blue work shirt on top. She swept the room carefully, as though alert for something, then turned back in the open doorway and motioned someone through.

A young girl stepped forward, pausing when the woman’s slender hand came to rest on her shoulder. The girl looked like a replica of the woman, with lighter blonde hair and a big cast on her forearm.

The kid had that same half-wild expression on her face, like she would turn and bolt from the restaurant if something spooked her. 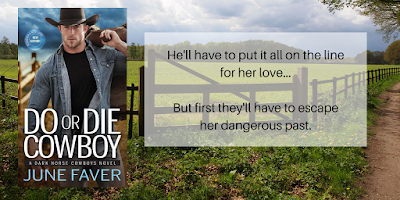 About June Faver
June Faver loves Texas, from the Gulf Coast to the Panhandle, from the Mexican border to the Piney Woods. Her novels embrace the heart and soul of the state and the larger-than-life Texans who romp across her pages. A former teacher and healthcare professional, she lives and writes in the Texas Hill Country.