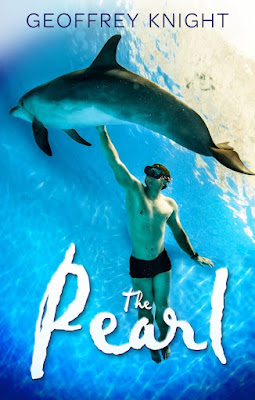 About The Pearl
The Top End of Australia—a tropical paradise filled with beauty. Wonder. Danger.

For two young boys growing up in the Northern Territory—half-Aboriginal Jarrah "Jad" Yindi and his best friend Luke Lawson—the remote beaches and aqua waters of the Top End are a playground of adventure. And as two best friends become young men, true love washes over them like the sea upon the sand.

But life is full of challenges and change, and if Jad is to discover who he really is, he must piece together his ancestral past, his dream-filled present and his uncertain future to become the man he was always destined to be.

Through water and fire; through love and loss; through the days of youth to the stories of the world's oldest living culture, journey across the heart of Australia to discover what's in the heart of one young man.

Add The Pearl on Goodreads.

An Excerpt from The Pearl
The moon set and the last hour before dawn was the hardest. I could barely see where I was going. More than once my boots slid on a rock and I hit the ground, bruising my side, my back, my thigh.

Slowly the black of night turned to the blue of a new day.

Slowly the stars disappeared and the pink of dawn filled the sky.

And then, with a sigh of relief, I saw the sun break on the far horizon and rise in a wavy ball.

I felt the instant blast of heat.

Then I looked around, and in the light of day I felt so incredibly alone. And so far away from everything I knew and loved.

I was in Arnhem Land.

A sparse landscape of rocks and canyons, scrubby bushland and red sand, most of it untouched by humankind for millions upon millions of years.

And here we were.

Me and Billy Shakespear in our rijis and nothing else.

I squinted into the sun. Billy was still fifty metres ahead of me, his barefoot step certain and unceasing.

My step was more erratic, desperate to keep up. I stumbled on another rock. I felt the bite of the sun on my brown skin which had lightened noticeably from my time in Sydney. My time away from the beaches and waters—my childhood playground—of the tropical north.

“Billy, wait up.” I breathed it at first, unsure of whether or not I really wanted to announce it.

Then my left foot slid forward on a loose rock and I fell backward on my arse so hard it made me grunt in pain.

That’s when I saw what had been sleeping under the rock.

That’s when I screamed out, “Billy!”

Growing up in the Northern Territory, I knew enough about snakes to know an Inland Taipan when I saw one. I’d seen charts. I’d studied it at school. And now I was staring at the world’s deadliest snake as it came swirling angrily through the red sand toward me, heading straight for the clumsy bastard that had tipped over its rock, slithering between my sprawled legs. And me, wearing nothing but that stupid riji to protect me?

“Billy!” I tried to squirm backward, elbowing my way frantically through the sand. The snake was faster than me, relentless in its pursuit. “Billy!!!”

The old Aborigine was still fifty metres away when I heard him shout, “Stop! Stay still!”

In the heat of the desert sun, against my natural tendency to run from confrontation—especially one this deadly—I froze.

The second I stopping scrambling, the snake stopped chasing.

Its body was still curled, ready to spring, ready to attack at any second.

And all the while I lay there panting in terror, propped on my elbows, legs spread with the killer snake between my knees, staring at me, its tongue flicking in and out, tasting my fear. Or rather, reading the threat. This much I knew, we learned it in school. Along with the fact that a single bite from an Inland Taipan can kill a hundred adult humans. But hell, when there’s one of them twenty centimetres from your balls, it doesn’t matter what your teachers taught you. You just want that snake gone.

That’s when the pearl shell of my riji quivered and picked up the sun.

The rainbow shimmer caught the eyes of the snake.

The Taipan raised its head, not aggressively, but hypnotically.

Its eyes seemed caught in the glint of the pearl shell. Mesmerised.

So much so that it didn’t notice the head of Billy’s spear nudge gently into the sand beneath its curved body.

About Geoffrey Knight
Geoffrey Knight is the author of more than 30 gay fiction novels, novellas and short stories, ranging in genre from gay adventure, gay romance, gay suspense and gay comedies. He is the recipient of two Rainbow Awards including Best Mystery Winner and Best Overall Gay Fiction Runner-up. His work has been featured in several anthologies including Best Gay Erotica 2013, and he appeared as Guest of Honor at the inaugural Rainbow Con in Florida, 2014.

Geoffrey has worked in advertising, politics and journalism, but nothing is as fun as telling stories. He lives with his partner, their baby daughter, two dogs and two cats in a rambling old house in North Queensland, Australia, where the paint is fraying and life is good.