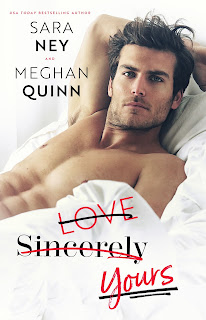 Best. Office. Romance. EVER! Sara Ney and Meghan Quinn went all wonder twin power and activated a whole lot of awesomeness in the process. (For those of you who are too young to know about the Wonder Twins, Google it!) I know I just called this the "best office romance ever" at the beginning of this review of mine, but calling it an office romance doesn't fully encompass what this book has to offer. Love Sincerely Yours is romantic comedy gold, or maybe we should go with platinum instead since that's deemed to be more valuable than gold nowadays. Ney and Quinn doubled down on all the romance and the comedy, and readers everywhere are reaping all the rewards.

Crushing on your boss isn't entirely unheard of, but when Peyton Lévêque's friends learn that she has a thing for their always moody and terribly brusque boss has them wondering what the hell is wrong with her. Rome Blackburn may be downright gorgeous, but his bad attitude has Peyton's co-workers running for the hills whenever he's around. But on her thirtieth birthday, her very inebriated state has her doing the one thing she never thought she'd do: confess to Rome exactly what she thinks, how she feels, and what she'd love for him to do to her. Of course, she does all of this anonymously. In the light of day, she can see how that was epically bad idea, especially if he ever finds out that she's "LSY". She's preparing to get thrown out of the office before her last day at work; instead, Peyton gets a reply from her thirty-five-year-old boss, and things are about to get very interesting indeed.

I laughed. I loved. And goodness, how I loved! This book was the change of pace I needed in the midst of more humdrum reads than I'd care to admit landing in my tablet as of late. I already knew what kind of authors Sara Ney and Meghan Quinn were prior to reading this book, and all I can say is that I wish these two had gotten together sooner and I sure as hell hope they keep writing together for a long-ass time. Heck, I couldn't even tell who wrote which parts, although if I had to venture a guess, I'd go with Ney writing Rome's chapter and Quinn doing Peyton's. That being said, chances are I'm completely wrong. For all I know these two didn't even split chapters! At this point, it doesn't really matter, not when a novel is written as well as this and has me itching for Hunter O'Rourke's!

Was Rome really the hard-ass his employees thought he was? Yes, he really was, and it was a fact that even his own best friend would heartily agree with. But Rome's being a workaholic and desire to keep Roam Inc. at the top of its game wasn't for purely selfish reasons, and I think it was that part of him that Peyton had glimpsed and made her see that there was more to the guy. My favorite thing about these two? The banter! From flirty to fiery and from serious to silly, I loved when it was just Rome and Peyton going back and forth. And if I anyone out there has any doubts if Ney and Quinn can pull off a slow burn romance, all they need to do is pick this book up. The sexual tension between the main characters had me eagerly anticipating what would happen when they finally got together as a couple, and boy, was the wait more than it! I know we're still more than two and a half months away from the end of the year, but keep an eye out for Love Sincerely Yours to be on my list of top reads. Five-plus stars! ♥