Review: Any Given Lifetime by Leta Blake 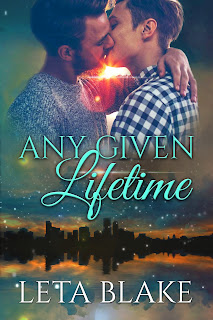 “There's nothing in this world—not my work, not nanites, not a single human being—who is what you are to me. You're the reason for my existence. Joshua, you're my everything. I'll find you in any given lifetime. Never forget that.”

It's 2012 and while one mother welcomes her son, a young man struggles to let go of the man he loves. Over the years, Joshua Stouder moves forward with his life and part of that life includes the Neil Russell Foundation, one that focuses on the nanite research, the very thing his boyfriend dedicated his life to right before he and their beloved dog was taken from him. On the other hand, Alice quickly comes to terms that her son is unlike any other boy his age; he speaks and acts with a maturity belonging to someone far older, but her love for and acceptance of her undeniably gifted yet very blunt boy is unwavering. When he goes off to medical school at the tender age of sixteen, Neil Green is as focused as ever on the direction he wants his career to later take--nanite research--and continuing to learn more about his particularly peculiar hobby--reincarnation. You see, from the moment he was born, Neil knew where his life was headed--and that was back to Joshua, but how will he explain to the only man he's ever loved that he's the same Neil from years ago, especially now that Joshua's fallen in love with Lee Fargo?

Leta Blake has yet to disappoint, offering up stories that almost seem as if they're daring you not to feel anything. With her latest standalone, Any Given Lifetime, she's weaved one hell of a heartrending yet hopeful tale about the power of true love and how it can survive even death. Do you necessarily need to believe in reincarnation in order to read this novel? No, but if you're the overly skeptical kind when it comes to matters like this, I'm going to suggest that you suspend your disbelief and simply allow yourself to be drawn into Neil and Joshua's love story. I've read romances that involved soul mates and reincarnation, but I don't think I've read one quite as original nor as creative as Blake's newest book. There isn't that feeling of déjà vu that's commonly associated with this sort of romantic theme. Instead, Neil knows he's been reincarnated from the get-go, but how the heck do you convince the man you love that while the past version of you was only several years older than him, this new version is twenty-two years younger? The author's fantastical take on true love was worth every single minute spent reading.

My heart broke for Joshua more than once in this story, but goodness, how resilient was this guy?! It would have taken less to break my own spirit, and yet, Joshua, time and again, knew he had to get back up and continue on with his life, and he didn't do it half-assed either. Then there was Neil, and boy, oh boy, but how I seriously wondered if he was my fictional male twin. I'm not talking about the whole genius part when it came to science, but more personality-wise, especially when it came to interacting with people. And let's not forget the supporting characters, each one playing an integral part in both Neil's and Joshua's lives, my favorites being Alice Green, Lee Fargo, and Derek Matthews. I swear, the cast of characters here may not have been overly packed, but I'll take the memorable few over any easily forgettable horde. Add to that Leta Blake's always remarkable storytelling, and you've got one of the best reads so far this year. Whether you're a fan of Blake's or an absolutely newbie to her writing, I highly recommend that you check out Any Given Lifetime to see what all the fuss is about. Five-plus stars. ♥

Purchase Any Given Lifetime on Amazon.