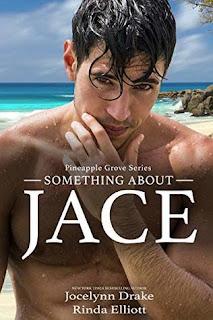 “I didn't expect anything like this,” Trent whispered. “But I'm so glad I found you.”

His heart, still beating like a bass drum, quickened again because that stare was full of something he couldn't put a name to—something that filled him with more hope than he knew what to do with.

He pulled Trent close and kissed him. “I'm glad I found you, too.”

It was back in October of 2017 when Jocelynn Drake and Rinda Elliott first made their presence known to me by way of the first novel in their Ward Security series, a spin-off of their original series together, Unbreakable Bonds. In a year's time, I've worked my way through both of those series and have fallen absolutely smitten, not just with the stories their core cast of characters had to tell but the characters themselves, and that includes those supporting characters who end up becoming so damn unforgettable and causing me to cross fingers and toes and make wishes upon the writing gods out there that they get their own stories told to. Well, one of those wishes came true when Drake and Elliott released Something About Jace, the Pineapple Grove series starter, which happens to feature an actor--film star Trent Elrige who was introduced in Sadistic Sherlock itching to find himself by taking a break from his hectic schedule and heads to Delray Beach in Florida and ends up finding a Pineapple Grove gallery owner who makes him want to break the rules, but could falling in love be at the risk of ending his career?

I admit it: I had major "le sigh" moments with this book; so many in fact that I'd lost count. Trent was someone I just knew deserved to have his own happily-ever-after but that didn't necessarily mean that it was going to be easy getting there. Attraction? Check. Lust? Check. Complications? Big fat check! After all, what's one of the world's most famous actors--who also happens to be considered as the most eligible bachelor around--to do when his bisexuality is known by only two people when he meets the first guy to ever have him wanting to pursue something? But then Jace Townsend seems to have inspired the nearly forty-year-old Trent to take a risk or two. I mean, hello, the man had his own business, didn't have delusions of grandeur, saw Trent as a man and not as a celebrity (not counting the initial recognition, of course), was a protective and caring older brother and friend, loved his community, and happened to be an amazing dad to his dog Ripley. I was smitten with him, so how could Trent not be, right? Le sigh. See? I can't seem to help myself with these two. Trent and Jace were just...le sigh. Gah!

Like Jocelynn Drake and Rinda Elliott's other books as a writing duo, there's an element of mystery and suspense in this book, but not necessarily at the same heightened level as those found in their Unbreakable Bonds and Ward Security series. The heart and heat that I've come to recognize as patented Drake and Elliott is still very much there, alongside the witticisms I love. While their first two series are very much entwined--although they can be read separately, but then I'm going to highly encourage you to read them in order and do yourselves the favor of basking in the awesomeness of Drake and Elliott's writing plus all the fantastic men you'll be meeting along the way--I suspect that Pineapple Grove will have far looser ties, if I'm basing it solely on Trent and Jace's book. If you've never read anything by these two (insert shocked gasp here), this latest release from them is as good a place to start as any, and I'm saying that not simply because I'm a fangirl of this writing partnership, but because it's difficult not to be drawn into the tales they weave. Like Something About Jace, there's just something about Drake and Elliott's storytelling that entices and then elicits such a loyal but deserved fan following. Five-plus stars. ♥

Purchase Something About Jace on Amazon.