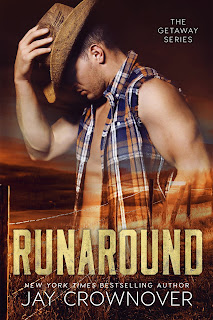 Without realizing it, my old friend trouble suddenly had a lot of competition for my time and attention. Falling into the comfort of the disorder and dysfunction I'd always embraced no longer seemed like the best idea. I finally had people who wanted to keep me around, and letting trouble come between me and their acceptance wasn't an option.

It looked like I was going to have to call it quits, finally break up with the familiar bad following me around once and for all.


I've loved the first three novels in Jay Crownover's Getaway series, but the fourth one? It's the one that's finally laid claim on my heart. Webb Bryant and Tennyson McKenna aren't new to the series, and now they get their shot at a happily-ever-after. Thirty-two-year-old Webb is a drifter, moving from place to place, not really finding reason to plant roots and heading off to wherever his feet may lead him. He ends up on a ranch in Wyoming, and for the first time in a long while, he isn't itching to leave. His older brother Wyatt is the only family he acknowledges--the only family he wants in his life--and it doesn't hurt that Webb's attention has been snagged with a no-nonsense older woman who knows better than to get involved with the likes of him. Except thirty-eight-year-old Sheridan, Wyoming forest ranger Ten can't seem to resist the draw that Webb represents. She's always liked knowing what comes next and keeping her life simple and organized. Becoming involved with Webb will only attract trouble, and when trouble comes looking for Webb, Ten must choose between life as she now knows it or following her heart.

Okay, I admit it: I have a thing for romances involving older women and younger men. Maybe it's because I'm in my forties and it's nice being able to read a love story where no one looks down their nose at a woman who are a few years older than the man she's involved with. I loved Ten and Webb and how they may have started off as two opposite sides of a coin and then finding not just common ground but love along the way. Female main characters like Ten aren't as commonplace as you would think, so hats off to Jay Crownover for giving readers a story that has a woman who doesn't simper or whine or make herself less than she is in hopes of pacifying the man in her life. Then there's Webb, and goodness, but as much of a troublemaker as the guy may have been, he loves fiercely and his loyalty is something that is never questioned, whether that be for his brother, Wyatt, or for his woman, Ten. Speaking of Wyatt, there was a hint of something...interesting...that seemed to be brewing between him and a certain sheriff named Rodie Collins. Dare I hope for, at the very least, a Getaway novella in the future for these two? Fingers and toes crossed for that one! For now, I am highly recommending the five-plus-starred Runaround. ♥