Review: Right Where I Want You by Jessica Hawkins 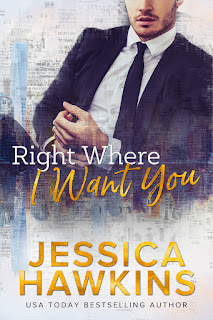 “Here's another should—I should not have called you anything as simple as beautiful. It's too mild a word. You're the stuff of dreams.”

Well, will you look at that? Just as I was preparing to finalize my list of 2018 favorite reads, one snuck in at the last minute. But then when you've got a novel as awesome as Jessica Hawkins's latest, there was just no way I could put together my list without adding it--and that was easier said than done considering this was a really fantastic year filled with an impressive array of reads under the romance genre umbrella. Right Where I Want You is a smartly written love story with bites of wit and humor and a whole lot of heart. It's a tale about taking risks to embrace the person you want to be rather than the one you need to be and how home isn't about a specific place.

When Modern Man's embattled creative director is informed that the higher ups have brought in a publishing consultant and public relations specialist to help the magazine get back in gear after the debacle of a negative article came out, he isn't exactly in a welcoming mood when it comes to this George Keller person. And then thirty-three-year-old Sebastian Quinn finds out that his team's new handler is actually Georgina Keller, the same woman he instantly noticed in a café and then brought to tears minutes after. There isn't a whole lot of love lost between them, but that spark of attraction still lingers. Georgina is a very real threat to Sebastian's career, and soon enough, she becomes an equally real threat to his peace of mind because the woman he hates is also the woman he wants.

Prior to this new standalone, I had previously read the author's Slip of the Tongue collection of hot and heavy standalones and her addictive Something in the Way series, so I can honestly say that Right Where I Want You had a very different feel to it. I love when an author whose work I've been impressed by before is able to surprise me, and that's exactly what Jessica Hawkins did with Georgina and Sebastian's love story. Yes, there's still a bit of angst, but this was far more lighthearted than my previous reads from her yet equally as absorbing and endearing as Manning Sutter and Lake Kaplan's epic romance in the Something in the Way saga. Georgina and Sebastian--don't call them George and Seb!--were complicated and had baggage, but I was totally invested in them. These two had their awesome best friends--I'm begging that Luciano and Justin get their own stories too!--but Bruno absolutely stole my heart...and had me shedding tears, too! Read Right Where I Want You to find out why I'm totally smitten by this unexpected combination of characters (human and canine!) and why it's a year-end favorite. Five-plus stars. ♥

Purchase Right Where I Want You on Amazon | Apple Books | B&N | Kobo.