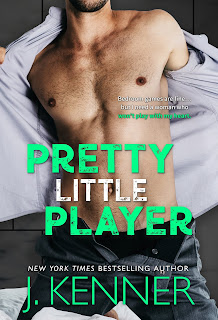 Pretty Little Player is the second book int J. Kenner's Blackwell-Lyon series, and this suspense read features Cayden Lyon, co-owner of Blackwell-Lyon Security, and Gracie Harmon, a model. Cayden knows what it's like to have the person you exchanged vows with break those same vows by cheating on you, so when a new client comes in and asks him to investigate and verify if his fiancée is stepping out on him or not. The last thing Cayden expects is to be as drawn to his mark as he is, but then he learns the truth about Gracie's situation. If he hopes to have any sort of future with her, Cayden's going to have to let go of his past and protect Gracie from an unclear but present danger.

This second book was definitely a step up from the first one, although I admit that there was one particular moment where I wondered just how good Cayden was at his job considering he kinda sucked at verifying certain details, but hey maybe his judgment was all screwy because of past experiences. It took longer than usual for me to really see the connection between Cayden and Gracie, but once it was there, it was THERE, full-on and undeniable. These two had a lot of push and pull, thanks in large part to the situation they found themselves in, but the tension is present, and that's a big thing when it comes to romantic suspense reads like Pretty Little Player.

While a tad longer than the first book, this second one is still pretty much a quicker than usual read--which basically means that it took me about an hour to get through it. I appreciated the balance of romance and suspense, and we do get bits and pieces of the rest of the characters that make up the Blackwell-Lyon series. This is paced well, as is the case for books that are shorter than full-length novels, and majority of J. Kenner's books--at least the ones that I've already read--have proven to be, for the most part, both entertaining and enjoyable. I'll be looking forward to reading the next one in the series, but in the meantime, I'm giving Pretty Little Player four stars. ♥