Review: Nothing Personal by Karina Halle 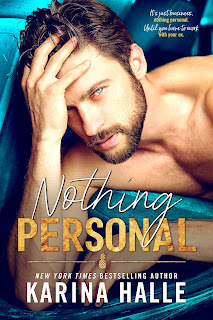 Karina Halle delivers a second-chance romance with a bite of sweetness like a ripe, fresh pineapple and a sting of wit and angst just like that prickly crown that sits atop a pineapple. What's up with all the pineapple comparisons? Well, Halle's latest release--published a day early!--is set against the backdrop of the picturesque paradise that is Hawaii, a US state known for its pineapples, AND the hotel where the main characters work use the same fruit as part of their image. But whether you love pineapples or not isn't really what counts; what does is whether you have a thing for a love story that has a bit more oomph to it and a love for second-chance romances, then Nothing Personal could very well be right up your alley. And if you're new to Halle's writing, this is a fantastic place to start.

When thirty-year-old Nova Lane's boss ups and leaves, she's called in by the higher-ups. However, instead of getting the promotion she thought she had in the bag, Nova learns that her ex-boss recommended his own replacement, and it's none other than Kessler Rocha--her former co-worker turned former lover turned new boss. It's been five years since Nova last saw Kessler and it's been five years since he broke her heart and she decided to make the move to Hawaii. Now, not only is she forced to have to work with him over the next three months of his probationary period but she finds out that he's got a three-year-old son named Hunter in tow. Nova intends to keep things between them as professional as possible, but when he asks to move on with her, things get personal.

This romantic comedy read had some definite high moments. From a chicken turned nemesis and geckos named Dwayne Johnson and the like to a wise nanny slash housekeeper and a wise-ass best friend who has no filter, Karina Halle's new novel was chock-full of interesting side characters (yes, I'm considering livestock and reptiles part of the cast of characters), but the main characters were no slouches either. Kessler and Nova had history and I confess that I wasn't a fan of Kessler's in the beginning, no thanks to how he ended his affair with Nova and certain assumptions that he made. The more mature version of him, however, did manage to win me over, though I did want to smack him later on for what he said to Nova. All's well that ends well and Nothing Personal gets 4.5 stars. ♥

Purchase Nothing Personal on Amazon.