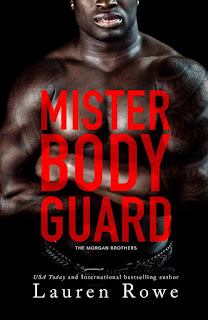 And the lighthearted feel of the Morgan Brothers series is back--not that I minded the heavier tone that the third book had, what with my being an angst addict and all--and Lauren Rowe gives her fans and readers an early Christmas present with this winner of a novel. Mister Bodyguard is the fourth and latest Morgan Brothers story and it's all about Zander Shaw, who may not carry the Morgan surname but is very much part of the family, being an honorary brother and close friend. He takes his duties seriously, but when he's tasked to become more of a glorified babysitter rather than a bodyguard to a former Disney star turned up and coming pop star, Zander quickly becomes the target of his friends' good-natured ribbing. It gets to the point where they don't think he's going to be resist getting down and dirty with Aloha Carmichael, but Zander assures them that isn't his style. He's so confident that he's willing to put his money where his mouth is. But the more time Zander and Aloha spend together, the clearer it becomes that Zander isn't merely going to be losing the bet; it looks like he's about to lose his heart, too.

Le sigh. Zander was...everything! Goodness me but how the guy had my heart all a-flutter. Her was no stranger to things like love and loyalty, whether it be the familial, platonic, or romantic kind. On the other hand, here was Aloha who knew that she had people who catered to her every whim and each desire but did so out of duty or for a paycheck or those who claimed to love her because they were fans. While Zander was by no means perfect--although he came seriously close!--he was perfect for Aloha, and I loved getting to know these two through their love story. Let's not forget, however, that the Morgans were present and their presence was notable and very much appreciated although thankfully not overbearing. At the end of the day, this was, after all, Zander and Aloha's story first and foremost. This series has been four of four, leaving me even more impressed with each new release. Is it fair to play favorites? Probably not but I don't care. I'm declaring my love and affection for  Zander and Aloha, snagging Mister Bodyguard five-plus stars. ❤