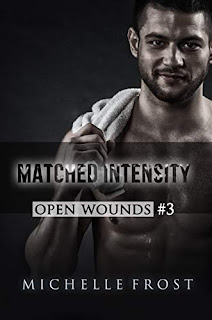 Stick the "addicted" label on me because as far as Michelle Frost's Open Wounds series is concerned, that's exactly what I am. When I started reading her series late this year, I had absolutely no clue what I had set myself up for. As if these five brothers and the men they find themselves entangled with--in more ways than one--weren't enough, there are these other side characters that have become part of the larger Open Wounds universe and damn if I'm not all curious and obsessed about finding out more about them and who they'll be ending up with as this totally addictive series goes forward. As always, I'm going to highly recommend you read these books in order of release.

Matched Intensity follows Carry and Drag and Take Down, books one and two, respectively, and is the second-chance love story between Magnus Roarke and Rory Wilson. It's been nearly a year since Magnus and Rory parted ways as lovers, a decision that Magnus, who was then-eighteen, had no say in, but one that then-twenty-year-old Rory had to insist upon. Their time apart saw them leading very separate lives, and Magnus's life was one Rory did not approve of, and he made his feelings very clear when Magnus returned from Los Angeles. But in the year and a half since that confrontational reunion, things between Magnus and Rory are strained, and their town of Cincinnati proves to be close quarters the porn star turned club owner and the MMA trainer...and all that tension boils over...

I mentioned the tension between Rory and Magnus because it's been there from the moment when and whenever these two happened to be within each other's vicinity in the past books, so naturally, my curiosity was at a high when I finally got to read their story. These two have history, and it's a pretty storied one, and the same goes for their respective back stories. There's a lot more than meets the eye as far as their break-up is concerned as well, and thrown in a secret or two that sheds more light to why these two erstwhile lovers have more hurdles than I expected. As always, I loved every aspect of this book, from the romance to the family dynamics to the potential pair-ups that we could see in future stories. Another thing I adore about this series is the fact that each book isn't overly long yet still packs quite a punch--pun unintended! Matched Intensity gets five stars. Bring on the next one! ♥