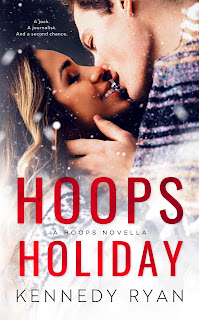 And then she collapses onto my chest and weeps.

I had originally signed up to read and review Hoops Holiday as part of the book's release blitz, but the advanced reader copy (ARC) for that only included the "main" novella, Full Court Press, and neither of the bonus holiday extras for the first two full-length Hoops novels, Long Shot and Block Shot. Lo and behold, the book was released early, and how could I say no to this mini collection for less than a dollar by one of my favorite go-to authors?! So, this review is going to cover my personal copy of Hoops Holiday, which means it'll be about the three stories that are part of it: Full Court Press, which was originally featured as part of the multi-authored Team Player anthology released in December 2017 and where I first read this prequel, plus the holiday shorts for book one and book two.

Full Court Press isn't necessarily a second-chance romance, but main characters Decker MacKenzie and Avery Hughes first met when he was in his second year as a professional basketball player and she was starting a new beat as a sports reporter and they were both in their twenties. A bit of flirtation leads to a whole lot more humiliation than either one bargained for, no thanks to a fallen towel. Ten years pass and Deck and Avery are in closer proximity to one another than ever before--as co-hosts of a gig on television. Both of them are dealing with relationships that ended with a whole lot of heartbreak, but while Deck may be ready to grab this chance with Avery with both hands, Avery isn't, and by the time that she will be, will Deck still be around to want another shot?

I love it when a story I loved the first time I read it still manages to get to me even after nearly a year has passed, and that's precisely what happened with Deck and Avery's story. I knew what was going to happen, yet I still found my poor emotions off-kilter, my heart with an off-beat rhythm as Avery confessed her heartrending secret to Deck and as Deck tried to harness his own thoughts and feelings because as much as he wanted to be with Avery, he knew in his heart of hearts that she wasn't ready for what they could be. Gah! Just take my heart already, why don't you, Kennedy Ryan?! While her books may not always guarantee to make you cry, it would be near impossible that any reader doesn't feel even an inkling of emotion and empathy for Ryan's characters and stories.

Now, while Full Court Press can be read as a standalone, the two holiday short stories included in this novella collection cannot. You're going to need to read Long Shot and Block Shot in order to have the truest kind of appreciation for these snippets plus links to the epilogues. I've honestly typed and then clicked backspace while writing this part of my review because I keep mentioning stuff I suddenly realize are spoilers to the two full-length novels. Yeah, I'm going to simply say that both these books are MUST-READ, so chop-chop because you MUST read them for the sole reason that they're freakishly amazing love stories. Think of it this way: you've got a few months to catch up to the Hoops series before Hook Shot is finally released. Get reading! Five-plus stars for Hoops Holiday. ♥