Review: He Is Mine by Mel Gough 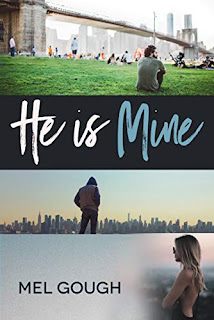 He Is Mine is a standalone romantic suspense read and my second read from Mel Gough. This book involves three people BUT it isn't a menage sort of tale. We have thirty-seven-year-old police detective Brad Moretti who recently broke up with his boyfriend, thirty-six-year-old film actor Damien Thomas who has a young daughter and is in the middle of a divorce, and thirty-year-old film actress Vivienne Aubert who is married to a director. Viv has a one-night stand with Damien, but while Damien has no intention of any sort of repeat with her, Viv wonders if it's time for her to latch on to a new man about town and cut her husband loose. Then Damien meets Brad and from the get-go, the two click and form an attachment to one another that hints at the promise of something far more meaningful. But Viv refuses to allow Damien to slip through her fingers. She's got her sights set on him and she's prepared to do whatever may be necessary in order to lay her claim on and make it clear to all that Damien is hers. Will Brad be able to stop Viv's obsession with Damien or could Brad be too late to protect the man he's falling for?

Mel Gough deserves kudos. Coming up with a highly original story in a genre that's got multiple releases popping out on a basis is no easy feat, yet she's managed to exactly that with this tale of three people whose lives intersect and change forever. It would be easy to slap a label on each one of the main characters, but Brad, Damien, and Viv were far more complex than simply being a cop, an actor, and an actress, respectively. I don't want to give too much away in terms of the plot and what lengths Viv goes to in order to have Damien solely hers. Instead, allow me to point out that this novel had an intriguing promise of a story, and it was a promise that was mostly met. There were moments wherein the pacing did feel to slow down before revving back up again, but for all intents and purposes, I was entertained from start to finish. While the entire cast of characters was fascinating, I feel that it was Brad who was truly at the very heart of this story, and he was the one who held everything together and the one I enjoyed getting to know and see evolve the most. All in all, He Is Mine was a commendable four-starred read. ♥

Purchase He Is Mine on Amazon.