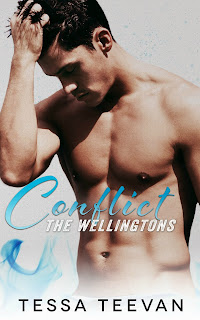 Conflict is the third full-length novel and fourth release in Tessa Teevan's Wellingtons series. I know the books are promoted as standalones but I recommending they be read in order. Full disclosure: this is something I suggest more often than not when it comes to books in a series. My suggestion, however, isn't solely based on my being all anal and needing to read books in a certain order. More often than not, there are recurring characters in a n interconnected series, just like in the case of the Wellingtons. But hey, feel free to do whatever suits you best.

Conflict is Shane Wellington and Alyssa Covington's story, and  the two find themselves sharing a late-night stand that proves to be a game changer for both of them. While Shane wants more, Alyssa isn't too keen on a repeat. Circumstances, however, have them crossing paths, but Shane has his work cut out for him if he hopes to convince his runaway bedmate that there's something worth exploring between the two of them. When Alyssa realizes Shane may be right, will it be too late for them?

Two things: I seriously liked Shane; and I seriously did NOT like Alyssa. This was a case of me wishing the male main character was with someone that other than his female counterpart. These two lacked chemistry and try as I might, I just couldn't convince myself that they were the happily-ever-after sort of pair. I've read some of the author's other books in the past, so I know what she's capable of. Unfortunately, Conflict isn't my  favorite from Tessa Teevan, and I'm giving this one three stars. ❤