Review: Beneath the Burn by Pam Godwin 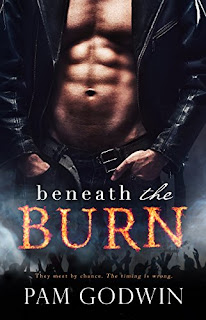 Beneath the Burn is an intense book filled with scars--both the kind that's immediately visible to the naked eye and the kind that's buried far deeper--that need to be healed but still acknowledged rather than hidden away. Pam Godwin is a wonderfully gifted writer who allows readers to take this seemingly harrowing journey into the darkness but it's a journey that ultimately leads towards the light at the end, a light that may have started as nothing more than a glimmer--a sliver of hope-- and becomes brighter the closer the main characters are drawn towards it.

Charlee Grosky and Jay Mayard are survivors--two individuals who are trying to get as far away from the lives they had prior to meeting for the first time in St. Louis only to part ways. Their paths cross yet again three years later, and the connection they share is as palpable as ever. However, there is a diabolical force that stands between them and their proverbial happily-ever-after: Roy Oxford. Will they be able to make it out singed but alive or will everything they have--their hopes and dreams for a future together--burn to the ground with nothing left but ashes?

There was something special about Charlee and Jay, and while their dark pasts were often skin-crawlingly reprehensible, theirs is a story of both survival and triumph, both as individuals and as a couple. This book had a complex but ultimately satisfying story and characters that had depth and were evolving throughout. Yes, some of the situations in the book were shocking but rape and abuse are not supposed to be the type of things that make you smile and nod your head approvingly. And yet, there was no turning away from what was happening from the first page to the last. The reader wants a resolution to come about and justice, in whatever form, to prevail. Beneath the Burn gets five solid stars and I highly recommend it to everyone out there who isn't afraid to take a chance on something that may not be the norm but is oh-so-worth the risk. ♥

Purchase Beneath the Burn on Amazon | Apple Books | B&N | Kobo.