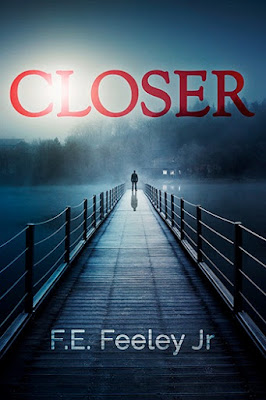 About Closer
Maplewood, Vermont is a picturesque town filled with unique shops, unique homes, and a quaint familiarity all centered around a lake with an unusual history.

Legends, old as well as Urban, float around like the mist that hovers above the lake at break of dawn.

But they're just stories, right?

Hayden Moore's life was destroyed when his husband, Malcolm, was murdered. Giving up his job as an assistant district attorney in Boston, Hayden moved to the little burg of Maplewood to recover.

However, something underneath the water is stirring. Something rotten. A deadly secret wakes underneath the black waters of Lake Veronica so disturbing it haunts the nightmares of the local residents.

F.E. Feeley, Jr. is a poet and the author of six published works – four full-length novels, two short stories featured in anthologies, and a poetry book.

Married to the love of his life, John, he came to the writing world about four years ago where he fell in love, again, with the written word.